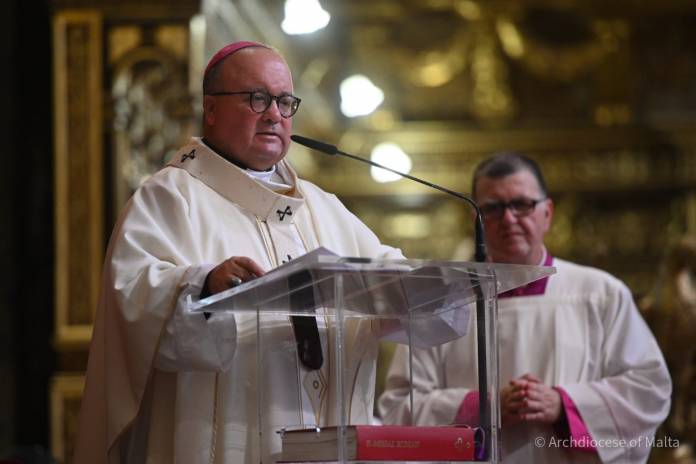 Archbishop Charles J Scicluna urged the members of the Armed Forces of Malta to uphold the values which the country and its constitution are based upon, to shun racial prejudice and use compassion. In his sermon during the celebration of Mass on the day commemorating the Armed Forces, Archbishop Scicluna stressed the importance of love and how this can be rendered in the work carried out by the Armed Forces. In this the feast day of the angels, the Archbishop likened the Armed Forces to Guardian Angels.

Taking his lead from the gospel, Archbishop Scicluna said that Jesus’ answer to the scribe can be summed up in one word: love. It is love, said the Archbishop which makes us human and fit for social living. It is love, he said, which is also the distinguishing factor in acts of service. He observed that in several occasions, the members of the Armed Forces must find themselves in positions where obedience to orders is carried out purely as an act of love for the country and its people particularly in their efforts to secure the safety of Malta on land and at sea. Referring directly to the work of the forces in Malta’s Search And Rescue area, the Archbishop said that the work of the forces should show a love expressed through duty to the law but in full respect to the people concerned, refraining from making any distinction based on race.  The Archbishop acknowledged the difficulty the Armed Forces have in taking these decisions, decision which for armchair critics may appear deceptively simple.

Orders based on justice

Archbishop Scicluna exhorted the members of the Armed Forces to be witnesses to the values on which the country and constitution are built. He urged the congregation to look to its conscience when serving, particularly to impart orders based on justice, sound values and deference to the common good. Do not look to race and avoid judgements which are partisan or racist, choosing instead words of tolerance and solidarity, advised the Archbishop. Society needs to be able to look at the Armed Forces as a good example for everyone.

Becs’ life celebration will be held on Wednesday

Watch: “We need to care for each other like true Christians” – Archbishop Scicluna

Listen to the wisdom of our elderly – Archbishop Scicluna