On an Independence Day palled by the bleak prospects the coronavirus pandemic, Archbishop Charles Scicluna stressed the importance of life and solidarity, the dignity of the human person and the common good. These were among the seven principles for healing which the Archbishop felt needed reminding on this, the 56th anniversary of Malta’s affirmation of sovereignty. The Archbishop felt the need to translate Pope Francis’ recent catechesis for ‘Healing the World’ into a local dimension. The Archbishop was delivering the homily to Malta’s highest dignitaries during the Mass celebrated on Independence Day. In observing these principles, noted Archbishop Scicluna we will truly be honouring “Lil Din l-Art Ħelwa”.

The rule of law and the common good

“The first among these rights is the right to life, which implies respect towards the life of every individual from the beginning of human existence, from conception to natural death,” stressed the Archbishop, underlining that the right to dignity refers to every person and is enshrined in the Constitution. The dignity of the person also demands respect for one’s conscience, added the Archbishop.

From this respect, born out of the right to life and dignity, follows the principle of the common good. The Archbishop said that this “teaches us that we need a remedy for every kind of egoism which may contaminate and corrupt an authentic approach to politics. If politics is to serve as an expression of service and love, it needs to be detached from every motivation of personal gain,” warned Archbishop Scicluna. He spoke of the “need to develop a genuine sense of belonging towards the State, which helps us develop respect of the rule of law, as well as responsibility and accountability. As a result, we will enjoy good governance which always strives for the common good”.

The preferential option for the poor

As Catholics, said the Archbishop, we are called to always choose to help the poor who will always be among us often in the guise of people like migrants and refugees pleading for help or, in the time of the pandemic, the sick and vulnerable.

“The preferential option for the poor is the remedy against the temptation of embracing a throwaway culture where a person’s worth depends on his or her strengths or how useful he or she is to society,” said Archbishop Scicluna. Tying this in with his earlier observations, he recalled that: “Every person is intrinsically valuable because he or she is made in the image of God”.

He noted that Maltese society is to be commended for the remarkable progress achieved in social welfare, “however, we need to remind ourselves that the greatest investment will always be in education. When we face the reality of poverty, we realise that more often than not, this is rooted in lack of education,” observed the Archbishop. 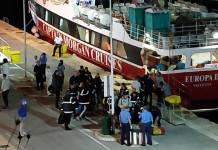 It’s not mine, it’s ours

Another principle mentioned by Pope Francis is the universal destination of goods. This is the concept behind such endeavours as the recognition of the common heritage of humankind. Archbishop Scicluna noted Malta’s contribution in that direction, despite its minuscule size when compared to other nations. He referred to naming the sea as a common heritage of humankind and the development of the concept of the rights for future generations.

“In all international fora, we must continue to insist on the equal distribution of wealth and on the results obtained in research projects. In response to the pandemic, Malta should be a strong voice that defends the right of every person to be entitled to receive the vaccine when this becomes available, even if this is developed by countries that are larger or wealthier than others,” said the Archbishop.

On Solidarity and online comments

In a society built on a culture of reciprocal care, its citizens also need to show mercy and reconciliation, not only between themselves but also with foreigners. The Archbishop said that “Showing solidarity whilst living through this pandemic also means caring for each other and following the measures issued by the Health Authorities”.

These measures, he said, demand some sacrifice “but our respect for these measures is a concrete way of practicing reciprocal solidarity”. Archbishop Scicluna also equated self-determination as a nation and solidarity and reciprocal care with self-expression.

“While maturing as a sovereign, autonomous and independent nation, we are called to care for one another in the way in which we express ourselves, including towards foreigners, particularly in our comments online,” said Archbishop Scicluna.

Archbishop Scicluna recalled that in his catecheses, Pope Francis also talks about the principle of subsidiarity. This concept implies that all share an important role within the State and that an excessive centralisation of power in the hands of the few is not beneficial to society.

The last principle mentioned by Pope Francis is the care for humankind’s common home. Archbishop Scicluna praised governments for the environmental initiatives taken over the years but warned that enforcement was lacking.

“However, it is not sufficient to have good laws. What is essential is that the laws are enforced. It is of primary importance that we develop an education that fosters a widespread ecological conscience. The promotion of the quality of life begins in the classroom or online, but also develops by the example given by the State when making important decisions,” observed the Archbishop.

The decisions of the state, he said, should favour the quality of life of its citizens, and also serve as a prophetic witness to the value of the environment.

“The environment, Creation, is the Creator’s greatest gift, a precious treasure that we are called to safeguard not only for ourselves but also for future generations. The awareness of the beauty of our environmental heritage, the gifts of Creation that surround us, and the beauty of the built environment inherited from our forefathers, compel us to stop and think before constructing yet another building which is void of any sense of aesthetical beauty or sustainability,” concluded the Archbishop.

1 of 12
LIVE: Archbishop presides over Mass on Independence Day 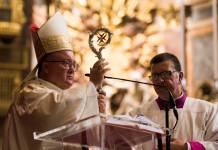