The Panamanian Martime Authorities have initiated the process to cancel the registration of the NGO vessel Aquarius after the Italian authorities reportedly told the Panamanian authorities that the Captain refused orders when 11 people were rescued from drowning. In comments given to Newsbook.com.mt the Aquarius expressed its concern and surprise that the Panamanian Maritime Authority has initiated the process of cancelling the ship’s registration. The Aquarius reminded that it had embarked on a life saving mission in international waters and reiterated that it was in full compliance with international maritime law. It also reiterated that its rescue missions are compliant and under the instructions of all competent maritime coordination centers in full transparency and compliance with maritime law and international regulations. 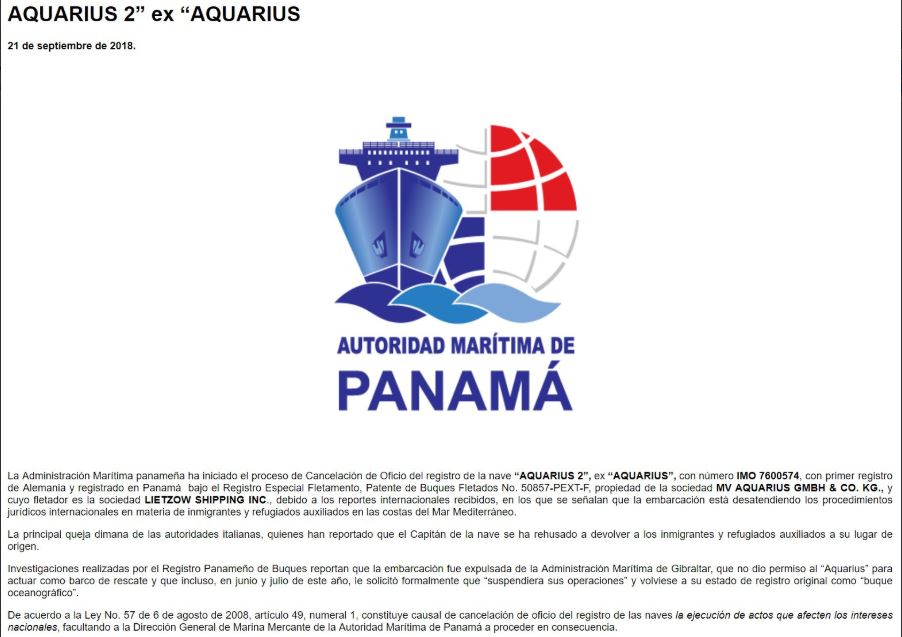 The Italian Interior Minister Matteo Salvini said that the Aquarius would not be allowed to dock in Italy. He also accused the vessel of refusing to cooperate with the Libyan Coast Guard despite Libya not being recognized as a port of safety. The Italian authorities reported the Captain to the Panamanian authorities claiming he refused to comply with orders and transfer the 11 people rescued to the Libyan authorities.

Malta, Italy decline to offer a place of safety

The Search and Rescue Coordinator, Nick Romaniuk, on board the Aquarius told Newsbook.com.mt that a decision was taken to proceed with the search and rescue in the area given the good weather conditions which could mean more departures from Libya. He was saying this given that Aquarius is the only vessel carrying out search and rescue operations in the central Mediterranean. Speaking about those rescued, Romaniuk said that they had no emergency medical cases however the 11 rescued are suffering from severe mental traumas. Romaniuk said that these rescuees need to be disembarked quickly in places were their basic rights are assured and in a place of safety. When asked what would happen if Malta and Italy continue to refuse a place of safety,  he said that they would ask the European Union to find a solution like last time when Malta was used as a platform allowing the transfer of 141 people from Aquarius to Malta.

Romaniuk reiterated that their civil search and rescue missions is needed now more than ever, and noted how there is a lack of conversation on search and rescue with people left dying at sea. In his words, the drowning of people in the Central Mediterranean and the lack of conversation within the European Union on sea rescue is making the drowning of people “acceptable”. He stressed that people should not be left dying at sea regardless where they are from. He also stressed that rescuees should only be transferred to places of safety where their human rights are respected.

The 11 people were rescued by Aquarius, a boat chartered by the NGO SOS MEDITERRANEE and operated in partnership with Doctors without Borders (MSF), from an overcrowded boat which was taking water and in which the people were exposed to caustic fuel. Following a non-response from the Libyan Joint Rescue Coordination Centre, Aquarius proceeded to rescue the people. An email was sent out to the Libyan, Italian, Maltese and Tunisian authorities about the on-going rescue operation. Some two hours later the Libyan JRCC made contact with the ship asking them to transfer those rescued to the Libyan Coast Guard patrol boat. The Aquarius refused to transfer the people on board citing international conventions on search and rescue which do not regard Libya as a port of safety. The Libyan authorities have instructed Aquarius to make contact with another coordination center or their flag state.

The Aquarius proceeded to with its mission looking for boats in distress at 25 nautical miles from the coast of Libya. The 11 people rescued by Aquarius consist of a majority of Pakistani men and one from Ivory Coast with an unaccompanied minor on board.

Since the beginning of this year,  more than 1,250 people have drowned on the Central Mediterranean route. 3 vessels belonging to civil search and rescue NGOs (SeaWatch, SeaEye, and Mission Lifeline) remain blocked in Malta along with a surveillance aircraft Moonbird.

Back in mid-August Aquarius was allowed to transfer 141 rescued people to Malta after a spat between Malta and Italy.

Amy Borg   March 31, 2020
The Malta Maritime Forum is urging government to also assist around 23,000 jobs in the maritime industry which has seen its activity drop by more than 50% in one month.

Watch: Malta will free itself from the pandemic – Abela

Government and Opposition agree on the nomination of Judge Mark Chetcuti...