Electrogas shareholder Paul Apap Bologna told the board of inquiry that he only realised that there was a “misdrafting” in the agreement two weeks ago.

An agreement between GEM and New Energy Supply, the latter which is fully owned by murder suspect Yorgen Fenech stated that the two companies worked together on developing the project in 2007. Apap Bologna claimed that this was a “misdrafting” of which he noted only now as he only got Fenech involved in January 2013.

This emerged while he was being questioned on the matter by lawyer Dr Therese Comodini Cachia.

It also transpired that despite having zero experience in planning, Apap Bologna was appointed to the MEPA board after he was approached by Michael Farrugia whom he knew since he is involved in the pharmaceutical industry and Farrugia is a doctor by profession. Apap Bologna told the board that he had taken up the role since he could learn on the job and it was a new experience for him.

The Electrogas shareholder continued to testify during the public inquiry into the murder of investigative journalist Daphne Caruana Galizia.

Apap Bologna had already taken the stand another time. Fellow shareholder Mark Gasan also testified in the inquiry when he denied dining with disgraced then Opposition Leader Joseph Muscat prior to the 2013.

In his testimony, Gasan told the board that both Apap Bologna and himself attended Electrogas board meetings.

The public inquiry into the murder of journalist Daphne Caruana Galizia is tasked with, amongst other things, determining whether the state did all it could to prevent the murder from happening.

AB: I'd imagine so. We had one-year time to get insurance cover.
Monique Agius
15:57 Dr Azzopardi asks whether his family (in reference to his wife) was given a direct order by Michelle Muscat to redesign Girgenti.

Apap Bologna says that SOCAR and Gasol came in together, with SOCAR guaranteeing for both. He adds that he did not check Gasol's accounts when it was agreed for it to join.
Monique Agius
15:47 Apap Bologna does not know when they signed their consortium agreement with Gasol.
Monique Agius
15:46 Chief Justice Emeritus notes that this is strange that the witness was given this appointment, adding that it would be understandable if Gasan had to be appointed.

"He obviously felt that I could contribute something," Apap Bologna replies.
Monique Agius
15:45 CC: What is your experience in planning?

AB: Zero to none.

CC: Why were you appointed to MEPA board?

AB: I'd learn on the job. I thought it was a good experience.

CC: Who approached you?

AB: Michael Farrugia. I knew him because I am in the pharmaceutical industry.
Monique Agius
15:43 Comodini Cachia reads out an email sent by Apap Bologna on 20 March 2017 to Halpin informing her that these investors to organise a site visit.

Apap Bologna says that these would be passed to him possibly from "SOCAR, etc" and he would accompany them when he was in Malta.
Monique Agius
15:42 CC: Were there investors interested in investing in Electrogas?

AB: No.
Monique Agius
15:32 In an email sent in 2016, the government was involved in the merchandise by Electrogas including recycled pencils and bags.

He is not aware.
Monique Agius
15:30 Apap Bologna says he does not know who Lindsey Gambin is. He does not even know the other individuals listed are. He says that he only got to know now that the Office of the Prime Minister had interfered.

Comodini Cachia asks whether he is aware that OPM instructed Electrogas on how to reply to the media, which interview requests should be accepted, how to reply from The Guardian, among other things.

He says that he was not aware.
Monique Agius
15:27 Apap Bologna says he only met Konrad Mizzi "much much later" and "on a different subject" when asked if he was aware that there was reliance on Konrad Mizzi to receive such concessions and approvals.

AB: Decrease.
Monique Agius
15:24 If the excise tax had to be included in the financial model this would have a decrease on return, Apap Bologna says. He needs to check when liquidated damages to Enemalta need to be paid if its during the 18-year agreement or once it is concluded.
Monique Agius
15:22 Apap Bologna says that the exemption on Excise Tax on each and every shipment was to be paid by the consumer, i.e. Enemalta.

"Are you aware that in the original agreement it was to be paid by Electrogas?" Comodini Cachia asks.

"Then go back and read the agreement," she replies.
Monique Agius
15:21 Apap Bologna denies being at a dinner or a lunch at Portomaso for which Muscat was present pre-2013 election.
Monique Agius
15:16 CC: Are you aware of this:

Dear all, the attached exchanged of emails is the inland revenue agreement €30m upfront payment is tax deductible, the VAT – Enemalta paid directly to government (rather than being billed to EGM and apply for a refund), any compensation to Electrogas would not be taxable on gas and is outside the scope of VAT.

AB: I'm not aware. I have to go back to the accountant.
Monique Agius
15:15 CC: Was that [the excise tax] the only concession on tax given to Electrogas?

AB: What I understand is that this was going to paid for by Enemalta [on excise tax].

CC: Were there other tax concessions.

AB: No. I thanked her for everything she did for the group as Chief Operations.

CC: How did you know it was a "challenging and exhausting" year?

AB: Because it was a challenging project.

CC: So you write this every year?

AB: I was referring to the project.
Monique Agius
15:12 CC: Were you involved in the administration of Electrogas in 2017?

AB: No I was not involved.
Monique Agius
15:10 Ocean Installer had placed a garnishee order on their accounts and this led to certain financial constraints, Apap Bologna says after the lawyer reads out an email sent out by Siemens to Fenech and Turab Musayev relating to serious funding problem. The issues related to Garnishee order by Ocean Installer, a waiver letter and the government's letter, and the urgent funding of EGM through the shareholder loan.
Monique Agius
15:10 He is not aware whether GEM received interest fees on the shareholder's loan.
Monique Agius
15:08 The shareholder's loan was probably to pay some service, Apap Bologna replies. He adds that there could have been a period when it was needed. He does not know the amount given to Electrogas. This would be money from GEM loaned to Electrogas.
Monique Agius
15:06 Comodini Cachia: Are you aware of the issue raised by the banks about the interest on the loan? And HSBC's query on the issue of double counting? [She reads an email from December 2017]

Apap Bologna: I need to check with the accountant.
Monique Agius
15:05 Comodini Cachia: Am I correct to say that GEM had to provide a shareholder's loan to Electrogas?

Comodini Cachia: Was it an interest free loan?

"Obviously there is an invoice for it," he says, adding that there is €1.5 million still to be paid to New Energy.
Monique Agius
14:59 She reads out, it relates to working with NES owned by Fenech and which was rejected by the then government back in 2007.

"Do you read everything very briefly?" she asks.
Monique Agius
14:50 The witness says that the audit went into project documents, financial documents, statutory, due diligence, original tender process and full forensic review, among other things.
Monique Agius
14:48 Comodini Cachia: Did the forensic audit verify whether this would have made a difference to the European Commission?

Apap Bologna: We've gave the auditors carte blanche and they had unfettered access.
Monique Agius
14:47 Dr Comodini Cachia explains that €20.20 are marked down as "development costs" in the accounts which included the fees for the shareholders. This was hidden away from Oxera.
Monique Agius
14:46 Dr Comodini Cachia explains that Oxera were assisting the government for the state aid request. Overcompensation would have prevented the upholding of the request. From the emails it emerged that this detail was omitted and not divulged to Oxera.
Monique Agius
14:45 Apap Bologna says that Oxera, the consultants engaged by the government were given this information.

He is pressed further and says he cannot elaborate whether this information was given to Oxera.
Monique Agius
14:42 Comodini Cachia reads out an email from Siemens April 2016 sent out to a number of people. The subject is the financial model.

The financial model in April 2016 included pre-construction and development costs.

Apap Bologna says that the development / success fee were a one time payment and that he does not know what Halpin refers to in her email.
Monique Agius
14:39 Comodini Cachia is reading out from an email by Catherine Halpin she mentions a refund.

The witness says he does not know.
Monique Agius
14:38 Comodini Cachia: Was the success fee or development fee ever revised as an amount?

Apap Bologna: Not that am aware of.
Monique Agius
14:37 Comodini Cachia: What was the €2 million development fee for?

Apap Bologna: I don't know off the cuff.
Monique Agius
14:36 Judge Mallia: Excuse my ignorance, but you've started milking the cow before it started producing milk.

Apap Bologna: No because it was financing other things.

He is asked to bring the documentation next time.
Monique Agius
14:35 Comodini Cachia: So you were paid €4.16 million from the loan for having the bank loan approved?

Apap Bologna: According to the invoice yes.
Monique Agius
14:34 Dr Comodini Cachia asks him what he understands by financial closes.

After he explains, she asks whether they received €4.1 million for reaching the financial close.
Monique Agius
14:33 Comodini Cachia: Why wouldn't you know why you received €6.1 million? Do you receive them every day?

Apap Bologna: At the time, Yorgen, Mr Fenech was handling. The monies went out to pay the expenses.
Monique Agius
14:32 The lawyer refers to two invoices issued, she asks about the milestones achieved on those dates.

Apap Bologna says that these were included in the project financing.
Monique Agius
14:16 He says that he does not know who would know about the need for government guarantee adding that he is not aware whether these included in the bid.
Monique Agius
14:16 Judge Mallia: Were you aware that the project needed a government guarantee at the beginning?

Apap Bologna: I was not aware of that.
Monique Agius
14:15 Judge Mallia: Did you know about the need for a government guarantee at that stage?

Apap Bologna: The government guarantee came in when the government got clearance for state aid.
Monique Agius
14:14 Judge Lofaro asks when they found out about the precarious situation of Gasol.

Dr Comodini Cachia says that he will be asked about other things too.
Monique Agius
14:11 Judge Mallia asks about the insurance cover on Electrogas. 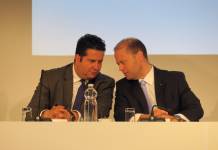 The Board of Inquiry is composed Judge Emeritus Michael Mallia, who is chairing the inquiry board, and two other board members, Chief Justice Emeritus Joseph Said Pullicino and Judge Abigail Lofaro.

Lawyers Jason Azzopardi and Therese Comodini Cachia are appearing for the family.