“For the mafia to reign, it needs silence,” journalist and blogger Manuel Delia told anti-corruption activists gathered outside Parliament on Wednesday evening.

The first anti-corruption protest to be called since MP Robert Abela was appointed Prime Minister took place on Wednesday evening. It was addressed by Delia, activist Julian Delia and Mark Anthony Sammut. The protest was called by rule of law NGO Repubblika and pressure group Occupy Justice after revelations that disgraced former Tourism Minister Konrad Mizzi was awarded a revolving-door consultancy contract with the Malta Tourism Authority. His resignation came after power station director and 17 Black owner Yorgen Fenech was arrested in connection to the journalist’s assassination. 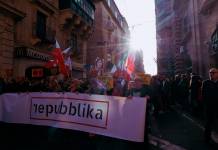 At the time Mizzi was awarded the contract, the tourism portfolio fell under the responsibility of then Prime Minister Joseph Muscat since no one was appointed in Mizzi’s stead.

The contract has since been rescinded after Tourism Minister Julia Farrugia Portelli sought legal advice on the termination of the contract.

“For the mafia to reign, it needs silence”

The silence of mafia

Blogger Manuel Delia from Repubblika told those gathered that for the mafia to reign, it requires silence. He referred to comments made by Prime Minister Abela during the day when he said that today’s protest was out of place. Delia explained that many have told the activists to give Abela some time since he was still new.

The blogger referred to a comment Abela had made when he was still just an MP. Then, he had referred to the public inquiry as being out of place. “Had Caruana Galizia’s family heeded to his ‘advice’, we’d have silence now,” Delia said. He then referred to the testimonies under oath by a former police inspector and FIAU investigator Jonathan Ferris, former FIAU head Manfred Galdes and former Police Commissioner John Rizzo.

“Hadn’t it been for journalism, Mizzi would still be enjoying his consultancy contract,” Delia pointed out. He added that the new government took a step back because it was “caught” in the act.

Former PN executive president Mark Anthony Sammut addressed the activists on Wednesday. He compared the newly appointed prime minister and cabinet to a new book, of which one enjoys the smell. However, he pointed out, the novelty of the new government has worn off already. Sammut said that during the first few days, he hoped things would be done in a different manner. However, they quickly realised that the style being adopted by the new administration was similar to that used by the preceding administration led by Joseph Muscat.

Sammut observed that while the police commissioner was removed, he was immediately awarded €30,000 in a consultancy contract, “to keep quiet”. Similarly, five days after Justyne Caruana was re-appointed as Minister for Gozo she had to resign because of the revelations regarding her husband, former Police Assistant Commissioner Silvio Valletta. She has since been appointed as chairman of the parliamentary committee for the consideration of bills.

Sammut also mentioned the almost appointment of disgraced former Tourism Minister Konrad Mizzi as the head of Maltese delegation to the OSCE which was revoked amid widespread anger, as well the consultancy contract was given to Mizzi two weeks after he resigned as minister late last year. The activist also mentioned Muscat’s presence at the OPM meeting held between the private enterprise which took over the three hospitals and the prime minister in a bid to renegotiate aspects of the private partnership deal.

Addressing Prime Minister Robert Abela directly, Sammut said that a change of heart amid widespread anger was not enough. He stated that integrity is shown when one takes the correct decisions when no one is looking.

Sammut also addressed Tourism Minister Julia Farrugia Portelli. He explained that if an entity which now falls under her responsibility handed out a lucrative contract to Mizzi, it was her duty to investigate. He added that former Planning Authority CEO Johann Buttigieg who was appointed as Malta Tourism Authority CEO should be fired for awarding the contract to Mizzi. He explained that if the board was aware of the contract, then the board should be made to resign.

“It can’t be, that in this country no one shoulders responsibility,” – Sammut told the crowd.

Activist Julian Delia was the first to address the people gathered outside parliament. He read a poem he penned himself. The piece, he said, was inspired by the video leaked from former Primer Minister Joseph Muscat’s birthday party. The infamous party had been held at Girgenti, the Prime Minister’s official summer residence. He dedicated his poem to the “elected corrupt” of Malta. In his disclaimer, Delia said that this was not a sermon and he does not intend on telling them on what to do or who to follow. “We’re all born with the same ability to determine what is wrong and what is right,” Delia said.

Memorial vandalised during the night

On Wednesday morning, an activist found the makeshift memorial smeared with what looked like tomato sauce and eggs, by unknown vandals at night. 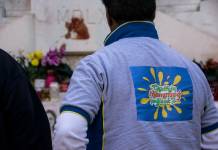