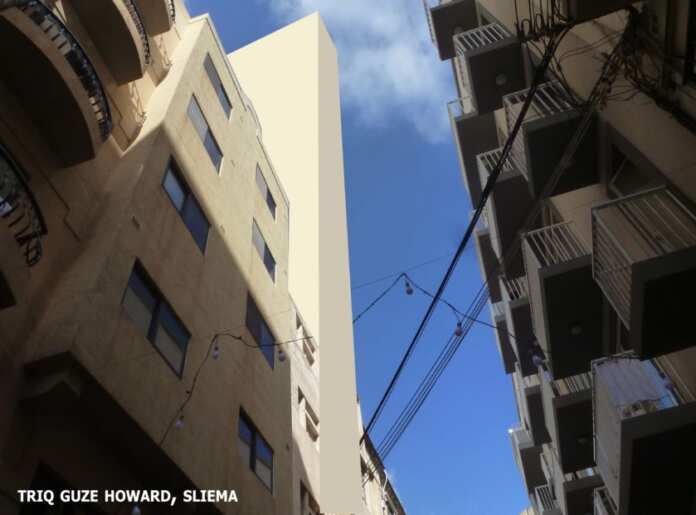 Flimkien għal Ambjent Aħjar, FAA, said that an anomaly in laws is allowing developments which are burying Sliema residents alive. This was said in a press release in which it explained that the Planning Authority is processing the application for the development of an 11-storey hotel in Triq Ġużè Howard, one of the narrowest roads in Sliema.

In a press release, it said that under the 2006 local plan, this particular street was only considered as suitable for development if the development does not exceed six storeys. Therefore, it explained that the introduction of the Height Limitation Adjustment Policy for Hotels in 2014 gave a carte blanche to all hotels to add as many floors as they desire. It remarked that this same policy was used to justify the “ITS monstrosity”.

In a press release, the organisation explained that should this project be approved, the building, which will be as high as 35 meters will jar five-storey blank wall subjecting surrounding tenants to perpetual darkness, with  all natural light and air completely shut out. The FAA explained that Triq Ġużè Howard is less than eight meters wide and therefore developments in this road should be limited to seven floors.

Furthermore, they stated that although the hotel owner is proposing to provide 94 suits, it will not be offering any parking space. According to the organisation, Transport Malta is concerned about this project and is asking developers to provide adequate parking space on site.