Albert Einstein wrote “Anyone who does not take the truth seriously in small matters, cannot be trusted in large ones either”. This quotation came to mind when I recalled a programme, I believe it was just prior to the 2013 election and Lou Bondi had asked the leaders, Gonzi and Muscat, a specific question: In politics, do you always tell the truth? The replies were very telling. Gonzi was pithy: Yes, always. Muscat hedged: Yes, sometimes you have to tell the truth.

If today there are people who evince surprise at the critical turn of events, I tell them: The writing was on the wall but you chose to ignore it.

We stand by truth

Truth is the daughter of time and as the saying goes, the truth will out. Truth is also one of the main tenets by which Newsbook.com.mt stands. And it stands against considerable odds. It has been several years now that this newsroom has been attacked, overtly and covertly with the aim of stopping its mission to be fair, accurate and trustworthy. Deprived of revenue streams which other media houses enjoy, we found others and thrived without compromising our voice. Deprived of information and excluded from calls for comments, we delved into our sources. Deprived of peace of mind through threats, insults and hate speech, our faith and unity preserved us.

Should Muscat resign now or in January? 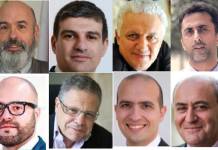 We will never surrender

In Parliament on Tuesday morning, what felt like a Conga-line of government MPs speaking about what purportedly was the ‘information relating to the murder of Daphne Caruana Galizia’ the perversion of truth reigned supreme. The victims of the untruth game played by the government with a plethora of disinformation, protestors outside parliament were turned into aggressors. Terms like ‘gang of criminals’, ‘sedition’ and ‘violence’ were used and abused in the sitting by a variety of MPs. Some were even scandalised that our journalist tried to get comments from the MPs as they left the building.

To be clear: our journalist was doing her jobs and doing it well. The aggression, well captured not only on our cameras but also on that of other media, was clearly directed at the person who was seeking to get information like the veritable sucking of blood out of a stone. This attack against our journalist is completely unacceptable. 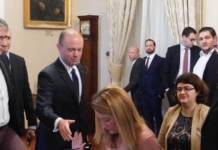 A few minutes later, when covering the PL activity outside the headquarters in Hamrun, our journalist heard the murmuring around him “Araw min huma dawn ta’ Newsbook” (Let’s see who the Newsbook journalists are).

This sort of harassment is not acceptable, as is even more unacceptable the physical aggression with which colleagues from other media were met.

We thank the IGM for its statement of condemnation.

Journalists should take a stronger stance

The IGM and we journalists need to take a stronger stand on government events and dry up the source of ego-tripping which MPs find in the media. If the media is not properly treated, why should the MPs be given a free ride?

Last Thursday there was further harassment against journalists this time in the Office of the Prime Minister during and after the marathon cabinet meeting at Castille.

A six-hour wait, penned in between barricades outside, then ushered into a hall, a brief statement and outruns the PM. The only ‘treat’ for the journalists is that they get locked-up for their pains. Held hostage. In an EU country. Right.

Meanwhile, the Commissioner for Standards in Public Life is investigating the lock-up and other infringements on the freedom of the press. This was an initiative he started on his own and to it he added the investigations related to the complaints by the IGM. For this we are thankful.

We will not back off

Then came the big scandal: What a shame. It was not Peter the cute Customs Hero who had led to this denouement. There you are, you see, liars and cheats. As I listened to the sitting in a growing sense of surreal disbelief, I thanked God that I did not suffer from selective recall as the MPs seemed to do. I recalled how the Prime Minister, in full panoply, has asserted that the arrest of Yorgen Fenech was not linked to that of the middleman, Melvin Theuma.

Then in Parliament, he said that it was linked.

What is the truth? Why was a story about a dog more important than Prime Ministerial disinformation? Difficult to answer that one and care must be taken that if one answers, one does not do an Owen Bonnici. In commenting about the murder, Bonnici had a Freudian slip and said that “Daphne was killed by politicians, sorry, by criminals”. The slip, normally understandable and trivial, takes a life of its own when one starts to realise the ramifications of this story. So much for liars and cheats.

Extraordinary times require of all extraordinary measures. From us, at Newsbook, it requires extra vigilance, renewed courage and stronger shots of coffee.

One thing we promise. We will not back off.

Peace is based on truth and justice – Bishop Galea-Curmi