A report published by the UNHCR estimates that in the past year, 2018, there were an average of 6 deaths daily. These were people fleeing desperate situations in their own countries. UNHCR said that the death rate doubled on some routes from one person dying for every 38 saved to one in every 14 saved.

The report, entitled ‘Desperate Journeys: Refugees and migrants arriving in Europe and at Europe’s borders, January-December 2018’  paints a damning picture of the reception of desperation at the hands of insensitivity and is a shocking testimonial to comfortable complacency in the face of hopelessness, fear and misery.

The report recommends the setting up of a regional mechanism to strengthen rescue at sea, disembarkation and processing, as well as the lifting of restrictions on NGOs.

“…people continued to flee their countries due to conflict, human rights violations, persecution, and poverty” 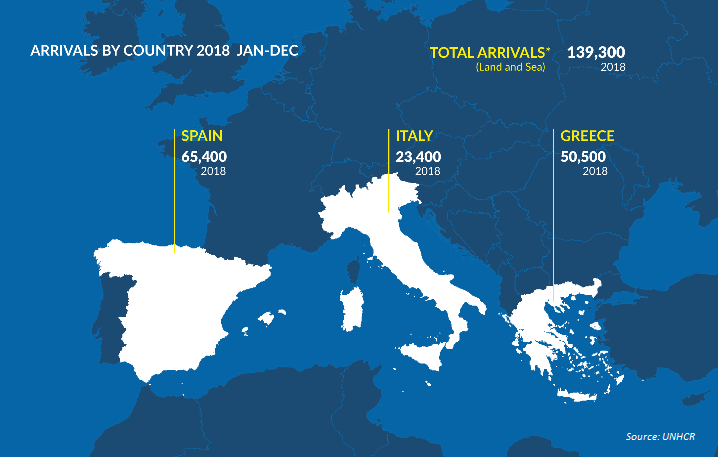 The number of refugees and migrants making the Mediterranean Sea crossing fell in 2018 but it is likely, said the UNHCR, that reductions to search and rescue capacity coupled with an uncoordinated and unpredictable response to disembarkation led to an increased death rate as people continued to flee their countries due to conflict, human rights violations, persecution, and poverty.

Throughout 2018, there were significant changes to the pattern of routes taken by refugees and migrants heading for Europe. For the first half of the year, more people arrived in Greece than Italy or Spain, in the second half, however, the primary entry point became Spain as more and more people attempted the perilous sea crossing over the Western Mediterranean.

Although arrivals were markedly down compared to the large numbers who reached Italy each year between 2014-2017 or Greece in 2015, the journeys were as dangerous as ever. An estimated 2,275 people perished in the Mediterranean in 2018 – an average of six deaths every day. On several occasions, large numbers of often traumatised and sick people were kept at sea for days before permission to disembark was granted, sometimes only after other states had pledged to relocate the majority of those who had been rescued. By the end of the year, this situation had not been resolved despite UNHCR’s and IOM’s continuous call to establish a predictable regional disembarkation mechanism in the Mediterranean Basin. 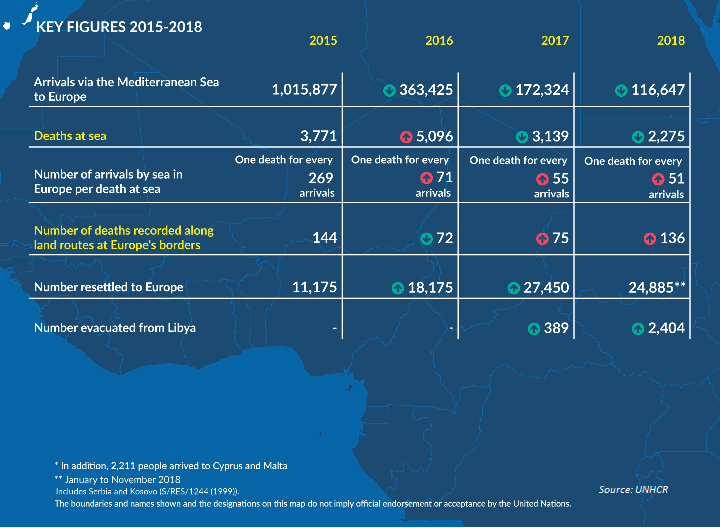 Furthermore, the Libyan Coast Guard stepped up its operations with the result that the report estimates that 85% of those rescued or intercepted in the newly established Libyan Search and Rescue Region (SRR) were disembarked in Libya, where they faced detention in appalling conditions (including limited access to food and outbreaks of disease at some facilities, along with several deaths). As a result, more vessels containing refugees and migrants attempted to sail beyond the Libyan SRR to evade the coast guard – either to make land in Malta and Italy or at least to reach the search and rescue regions of those jurisdictions. This trend, said UNHCR,  is expected to continue in 2019.

Although the overall number of deaths at sea in the Central Mediterranean more than halved in 2018 compared to the previous year, the rate of deaths per number of people attempting the journey rose sharply. On the crossing from Libya to Europe, for instance, the rate went from one death for every 38 arrivals in 2017 to one for every 14 arrivals last year. The toll was particularly heavy in the Western Mediterranean, on the route to Spain, where the number of deaths almost quadrupled in 2018 over the previous year.

Elsewhere in Europe, Bosnia and Herzegovina recorded some 24,100 arrivals as refugees and migrants transiting through the Western Balkans searched for new routes to EU Member States; Cyprus received several boats carrying Syrians from Lebanon, along with arrivals from Turkey and more by air, straining accommodation and processing capacity; and towards the end of the year, small numbers of people tried to make the sea crossing from France to the UK.

The journey – that final frontier

Most of these trends look set to continue in 2019, with the root causes of displacement and migratory movements – such as human rights violations and conflict or poverty – remaining unresolved. For many people, the sea crossing is just the final step in a journey that has involved travel through conflict zones or deserts, the danger of kidnapping and torture for ransom, and the threat from traffickers in human beings. UNHCR is also calling on States to stop apprehending and returning thousands of people to neighbouring countries without allowing them to seek asylum or assessing individually whether they have international protection or other humanitarian needs – a practice known as “push-backs” – as well as to greatly step up efforts to protect children – accompanied or alone – and to provide support for survivors of sexual and gender-based violence, as well as better access to safe and legal pathways as alternatives to these dangerous journeys.

The past 12 months did bring some positive developments. More states committed to resettling refugees evacuated from Libya, thus enabling UNHCR to bring more people to safety via the Emergency Transit Mechanism established in Niger. At the end of the year, UNHCR opened the Gathering and Departure Facility in Tripoli, enabling the release of more people from detention. Several EU Member States also committed to relocations of people rescued in the Central Mediterranean – a sign of the potential for joint international action.

Indeed, this report calls for the urgent establishment of a coordinated and predictable regional response to rescue at sea, as well as greater responsibility sharing in general. This should include increased rescue capacity, specified and predictable disembarkation points, more solidarity and support for those countries where most refugees and migrants arrive, improved access to safe and legal pathways (such as resettlement, family reunification, education and labour schemes), greater protection for unaccompanied children and sexual and gender-based violence survivors, and tougher measures against the perpetrators of crimes against refugees and migrants, including traffickers and smugglers.

Amy Borg   February 23, 2020
Chief Justice Emeritus Vincent De Gaetano told Newsbook.com.mt that President George Vella was merely upholding the law when he recently made a pro-life speech in which he took a public stand against the legalisation of abortion.

Reuters   February 24, 2020
More than 200 people have come down with the virus since Friday, latest data showed, the vast majority of them in the wealthy northern regions of Lombardy and Veneto.