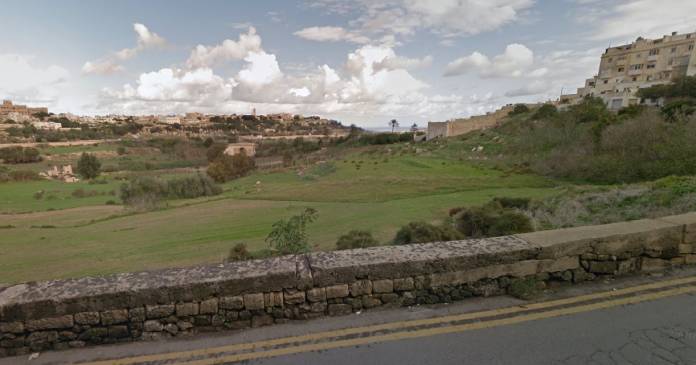 The proposal for the construction of a promenade on the scenic road circling Rabat as one leaves the Roman Domus has raised considerable environmental concerns. The area is not only rich in archaeology, but it is also environmentally sensitive and impinges directly on land which is still arable served through freshwater springs. The main contentions of the objectors who spoke to Newsbook.com.mt are that the widening is unnecessary, that it impinges negatively on the scenic view and the process itself is stopping the objectors from really knowing what is going on.

Encroachment on the scenic valley

PA 4647/18 was submitted by the government for “Landscaping works including alterations to the carriageway, construction of promenade, installation of infrastructural services, paving works, installation of street furniture and provision of parking spaces.” This application covers a stretch of the road roughly 700m in length and drew the objection of over 1,100 persons including environmentalists, residents, farmers and cyclists.

One of the main concerns of the objectors is that the route will involve road widening and will be encroaching on the valley. The objectors said that this is being done to accommodate parking when Transport Malta should be looking to pushing for a modal shift of transportation away from the reliance on private cars.

Objectors are also concerned that the decision on the road-widening will be taken when the plans for how the parking will be laid out have not been submitted. Indeed, the conditions listed in the Case Officer’s report note that the plans may be submitted after the decision on the application is taken but before the works on site start. However, the objectors maintain that by then it will be too late, and the public wouldn’t have seen the plans to be able to comment.  Objectors who spoke to Newsbook.com.mt said that an area of high landscape value was being turned into a parking lot.

Another area of concern to the objectors is that archaeological monitoring or studies have not been done. Similar to the issue of parking, the Planning Directorate is suggesting that the application is approved without these studies, but works do not start until studies are carried out.

The Case Officer’s report states that the encroachment on the arable land is justified in terms of the SPED  in the policy which seeks “To facilitate the modal shift through the provision of an integrated transport network and a parking framework whilst minimising their adverse environmental impacts particularly on protected areas and species”. Objectors noted to Newsbook.com.mt that a modal shift is defined as a switch away from one form of transport to another. “There is no way that this proposal is facilitating a modal switch. Rather the opposite – it is facilitating and promoting greater car use by widening the carriageway and providing even more parking spaces, at the expense of the environment, the ecosystems in the area and the visual aspect. Although there is the construction of a promenade, this is not to facilitate any modal shift but to promote recreation. The inclusion of a promenade could still be done without the encroachment over agricultural land and without widening the carriageway. It is insulting for a provision of SPED to be quoted totally out of context when the proposal will in fact breach that same provision of SPED” said one of the objectors.

They added that this proposal is for increasing car use, not for a modal shift particularly since the inclusion of a cycle lane was rejected out of hand. “Whilst the carriageway for cars was increased, the cycle lane was not introduced – with the excuse that it would take up more agricultural land. What was the excuse for widening the carriageway then? What great traffic jams where there? Didn’t the car promotion road widening exercise take up agricultural land with detrimental environmental effects in breach of SPED?” asked the objectors.

Objectors out on a limb

The objectors pointed out to Newsbook.com.mt that this is an area of high landscape value. They complained that there is no photomontage of what the development will look like from the most obvious viewpoint – from the road where the carriageway is to be widened and the inclusion of the parked cars in the soon to be provided parking bays is not shown. They added that the DPAR turned down the suggestions for control of lighting which will result in light pollution and the environmental and ecological impact on the area will be great.

The objectors also noted to Newsbook.com.mt that the application did not contain all the relevant information for the Board to decide, observing that there was no block plan, elevation or photomontage to show impact.  They concluded that it cannot be understood why a road widening and paving project, without any shading through landscaping,  abutting onto precious natural, scenic and agricultural land is being proposed for approval in breach of all relevant planning policies and with such wanton disregard for the treasure that is Rabat and Ghexierem.