It was – technically speaking – business as usual in Parliament today, as MPs debated a proposed amendment to regulations government fireworks factories today.

Government insisted that today’s agenda should not be changed, in spite of the Opposition’s request to do so, and PN MP Beppe Fenech Adami was highly critical of the government’s decision to choose to discuss a simple bill instead of the coronavirus outbreak. 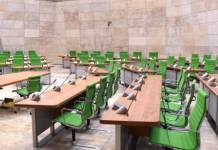 “In the fact of a tragedy unfolding in front of our very eyes, we are discussing a law which amends a clause with a few words,” the MP said.

However, Energy Minister Michael Farrugia insisted that by insisting on putting off debate, the opposition showed that it did not care about the concerns of those working in fireworks factories.

The bill tackles a possible issue concerning the interpretation of regulations. While the Explosives Ordinance – a law initially introduced by the British colonial government to regulate the handling of munitions – mandates the building of a high wall around explosives factories, no such requirement is present in the Control of Fireworks and Other Explosives Regulations. The proposed amendment would make it clear that fireworks factories are exempt from being required to build a high wall, in contrast to other explosives factories.

Parliamentary Secretary Alex Muscat noted that fireworks factories generally already do not build these fences; to keep people at a safe distance, such factories are already required to put up clear signs.

Muscat pointed out that according to recommendations on fireworks factories, building a high fence could actually prove counterproductive. Should an explosion happen, he explained, high walls could create additional debris and limit evacuation routes for survivors.

On his part, Parliamentary Secretary for EU Funds Stefan Zrinzo Azzopardi – who had advised a number of fireworks manufacturers in his legal career – suggested a further amendment to address other legal anomalies. He argued that the law should clearly distinguish between the area in which fireworks were manufactured and the complex in its entirety, which would also include stores.

Perhaps inevitably, concerns about the coronavirus outbreak often derailed discussion. Muscat and Home Affairs Minister Byron Camilleri both observed that fireworks enthusiasts were concerned about the outbreak’s impact on village feasts: this week’s St Joseph Feast in Rabat has already been cancelled.