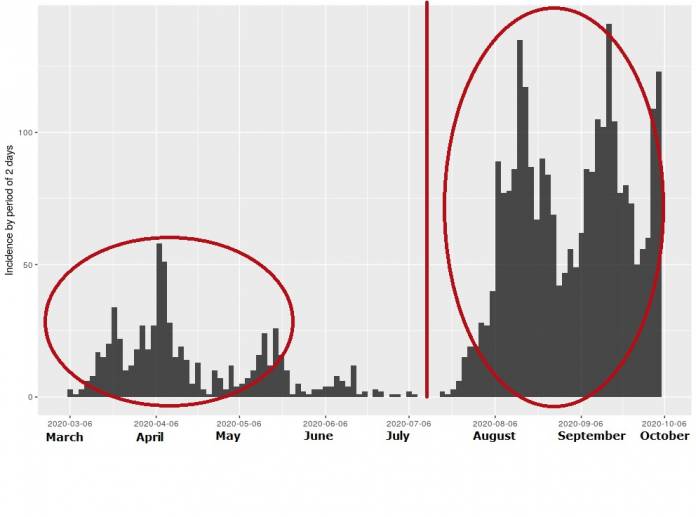 One does not have to be an epidemiologist to be alarmed with the trend which our daily new cases of COVIC-19 are taking. One just needs to look at a graph like the epidemic curve shown here. Recall that there is no need for a sophisticated statistical analysis of this picture. It is just a histogram of new cases grouped in successive sequences of two days. This helps smooth out some of the fluctuations and two days seems to synchronise well with COVID’s incubation period. Just compare the first phase which started in March with the present second phase which started on July 26th. In both phases, the numbers followed a wave-like ebb and flow. In the first phase, after the second wave, the peaks started to decline and after two more waves the numbers petered out to a long chain when we had one or no new cases every day.

But now, we are in the third wave of this second phase, each of them much higher than any of the waves in the first phase, and there is no sign that the peaks of successive waves are getting lower. If conditions for the spread of the virus remain as they are, then the best we can hope for seems to be a continuation of this ebb and flow at this level. But in the first phase, we were not facing the opening of schools nor the oncoming seasonal flu. If these or other factors make the virus spread more easily, then we might face the possibility that one of these waves maintains its upwards trend for much, much longer, bringing us into the realm of the exponential increase in the number of COVID cases, as happened in other countries and as we have till now managed to avoid.

Let us not look for anyone to blame but for solutions, starting with greater efforts from each one of us to stop the spread of the virus.