Air Malta helped in saving up to €5.5 million in cargo costs, as it assisted the Maltese Government in delivering about 800 tonnes of medical supplies to Mater Dei Hospital.

In a statement, the national airline described that this comes following a request for assistance by the hospital’s logistics department. Air Malta CEO Clifford Chetcuti intervened to find a better solution to a proposal submitted by a Hong Kong-based logistics operator.

To transport the supplies itself, Air Malta would require to operate some 100 flights to and from China. Additionally, the airline’s crew would end up quarantined both in China and upon their return to Malta. Analysing the Government’s request Air Malta proposed that a ‘freighter aircraft’ be chartered to transport the supplies, however, it does not have this capacity within its fleet.

It was later agreed that the cargo would be brought to Malta using eight special flights operated by Qatar Airways Boeing 777 Freighter.

Minister for Economy and Investment Silvio Schembri described that this shows the tenacity and diligence by Air Malta’s management, as it engages with the right strategic commercial partners who support our national airline.

Announced back in March:
EU to buy medical equipment for hospitals 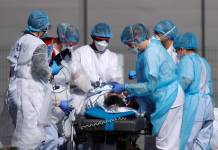