The Airline Pilots Association (ALPA) held an Extraordinary General Meeting (EGM) to discuss the proposals put forward by Air Malta on 24th June, but which were then withdrawn ‘without providing reasonable justification’. The Association nonetheless presented these proposals in the interest of transparency, and they were not favourably received by the members present.

This was outlined in a statement issued by ALPA, where it was explained that the association was urged by Minister for the Economy Silvio Schembri to vote in favour of these proposals. However, these were withdrawn despite the association making the necessary arrangements to hold the EGM on 29th June. It decided to hold the EGM nonetheless.

Air Malta withdrew its proposals following the court ruling that airline can proceed to make 69 of its pilots redundant, but that it could not demote a further 30 pilots. In its decision, the court ruled that the courts do not have the power to stop any kind of redundancies since Air Malta’s decision had come into force. 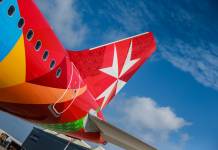 The proposals were presented to the members nontheless, in the interest of transparency and accountability. However, the statement notes that the proposals were not favourably received bu the members present. The association reaffirmed its willingness to enter into meaningful consultation with the company in order to reach an agreement.

A unanimous vote of confidence in the present Executive Committee was registered during said meeting.