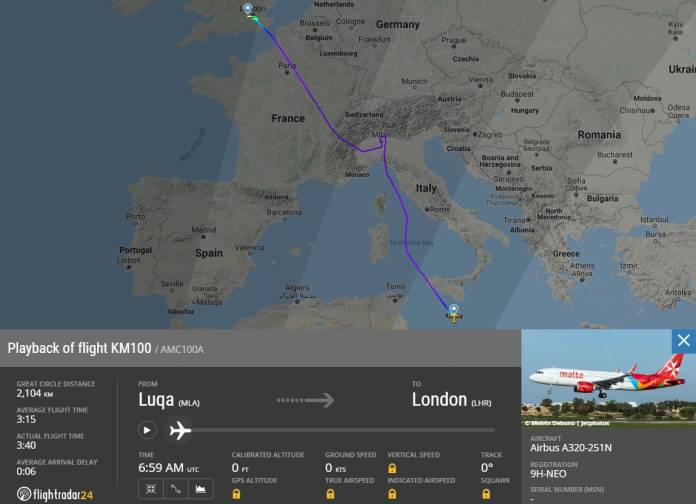 Air Malta has issued a statement denying reports on a flight diversion. Without mentioning the report or even that on the flight in question, there was outgoing Prime Minister Joseph Muscat on board, the national airline said that the slight delay of the flight was due to a procedural error.

Air Malta said that the delay on flight KM100 to London Heathrow was caused by a procedural error when submitting the flight plan. This caused the flight to be held in Italy by air traffic control before entering French airspace.

“The flight in question was not planned to enter Swiss airspace and the delay was only to allow the Airline to update the flight plan with the French Air Traffic Authorities,” the statement reads.

Blogger and journalist Manuel Delia published a report titled Plane with Joseph Muscat on board refused overflight by Switzerland. The report claims that Swiss air traffic controllers refused permission to the plane and was therefore forced to turn back into Italy and fly over France to continue towards its destination. It also claims that no formal reason was given for the overflight refusal by the Swiss authorities.

Sources close to the airline confirmed that the statement issued on Saturday referred to the same flight on which Muscat and his family traveled to London. Delia’s report also stated that on the same flight there was Karl and Diane Izzo, both family friends of the Muscats. Karl Izzo was appointed as Malta’s ambassador to Montenegro.