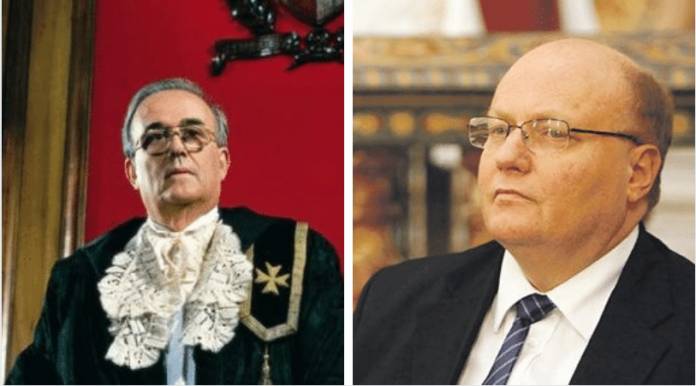 While the Chief Justice Emeritus said in Court that a note by Attorney General(AG) advises the police to go slow on the Panama Papers, the AG strongly denied this in a comment to Newsbook.com.mt. The AG, in his original statement, referred only to the post on Facebook written by the Caruana Galizia family lawyer Dr Jason Azzopardi. But Newsbook.com.mt reminded him that it was the former Chief Justice who had alluded to the written note in open court. Replying to our questions the AG said that he still refuted what the Chief Justice Emeritus said

The issue erupted at around 11:30 am on Wednesday during the hearing of the Inquiry when former chief of the Economic Crimes Unit of the Police Force Ian Abdilla was on the witness stand. Abdilla was getting told off by the presiding judges for the ECU’s complete inertia on the case of the Panama Papers. The Judges listened in disbelief as Abdilla said that he did not investigate the Panama Papers and neither did the police force engage Europol to do so. Mr Justice Said Pullicino pressed on with questions regarding the Panama Papers. At one point, he asked “You are aware, are you not, of the note by the AG in to police file advising you to tread very carefully regarding the Panama Papers, because there was trouble brewing for the country? Was that why you did nothing?”. The lawyers for the Caruana Galizia family were visibly taken by surprise at this seemingly quasi-quote. In the courtroom, Abdilla was verbally evasive. However,  observers present in the courtroom said that Abdilla physically appeared to nod.

In a Facebook post and a separate Tweet, one of the Caruana Galizia lawyers, Dr Jason Azzopardi wrote “Bombshell revelation by Public Inquiry Board that in the Police file of the ECU exhibited (on the insistence of the lawyers for Daphne’s family) with the Board on Panama Papers there’s a written advice by Dr Peter Grech (the ATTORNEY GENERAL) warning Police to go slow on this investigation as it will be cause trouble in the country!”

The Attorney General, Dr Peter Grech immediately issued a statement where he categorically denied as a ‘lie and a calumny’ what he referred to as “the allegation” made by Dr Azzopardi on Facebook.

Farrugia would check with Mizzi and Schembri before releasing government statements

Yorgen Fenech back in court