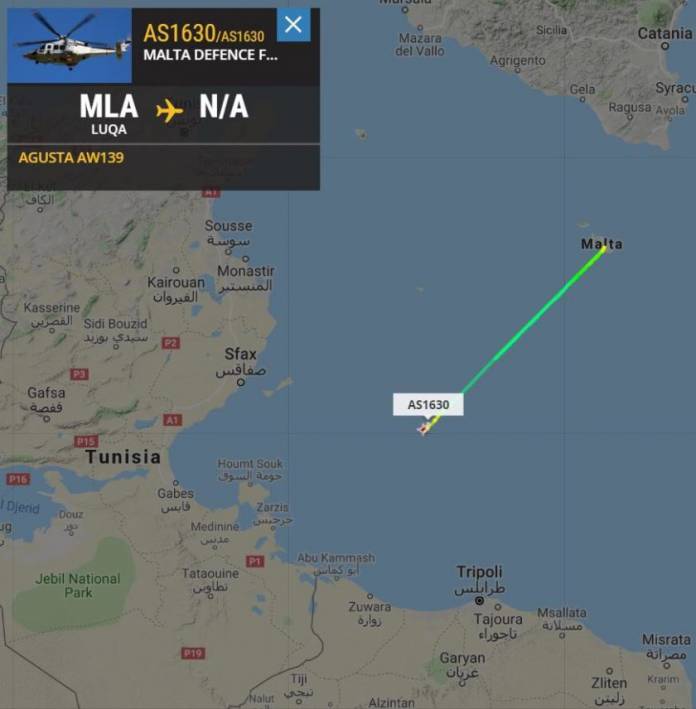 A Search and Rescue operation is currently underway in the Central Mediterranean, where a rubber boat carrying migrants is believed to be distress.

A spokesperson confirmed to Newsbook.com.mt that assets from the Armed Forces of Malta are currently involved in the SAR operation. They also confirmed that they had been notified of the situation just over two hours earlier.

It is understood that the AFM asset is a twin-engined Augusta Westland AW139 maritime patrol helicopter. According to mapping information, the helicopter is designated SAR2345.

A tweet from Italian Radio journalist Sergio Scandura explains that the rubber boat is five hours away from any commercial or SAR vessels. The dinghy is geolocated south of Lampedusa.

‘There are no SAR or cargo lookouts involved for the target.’

This news follows the earlier rescue by the Ocean Viking of a group of 105 migrants who were close to drowning following their rubber dinghy bursting.

According to MSF and SOS Mediterranee who are operating their migrant rescue vessel, there are now 356 people on board.

BREAKING: @SOSMedIntl and @MSF_Sea just completed a critical rescue. Minutes after lifejackets were distributed, a rubber tube on the fragile boat burst, causing people to fall into the water. All 105 people are now safely on the #OceanViking, where the total onboard is now 356. pic.twitter.com/l9uXmhRv9u

Amy Borg   August 11, 2020
Following a cooler-than-average Jun, the Maltese islands experienced air temperatures that were higher than expected during the month of July, according to data published by the Malta International Airport.

John Paul Cordina   August 13, 2020
There are no plans so far to once more restrict non-essential travel between Malta and Gozo, Newsbook.com.mt is informed.