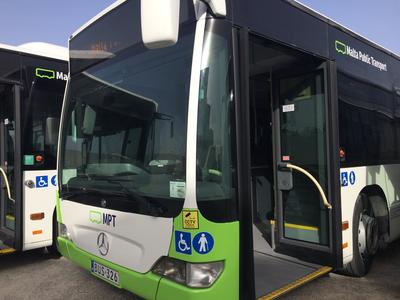 With effect from Sunday 6 October, the bus frequency on certain routes is expected to increase, Transport Malta announced on Saturday.

An additional trip will be introduced every hour from 6 and 8 am on the route from Żabbar to Valletta, passing through Fgura and Paola.

An additional trip on route 212 which links Buġibba/Qawra to Sliema/St Julian’s through Baħar iċ-Ċagħaq and Pembroke, will be added every hour between 5.30 and 9 am and 3 and 6 pm.

Route X1A which is aimed at facilitating transport for Gozitan students commuting to the University of Malta will have two additional trips between 4 and 5.15 pm from Monday to Thursday. Additional trips on Route 310 linking Marsalforn to Victoria will also be made.

With effect from Sunday 3 November, Route 64 from Qormi to Valletta will be extended to include Imrieħel’s Central Business District.

Transport Malta said that these changes are aimed at encouraging people making use of public transport over their personal cars.

Expired vehicle licences can be renewed by end of August

More Maritime-related exams to be held at Transport Malta