The contract awarded to Konrad Mizzi came to light a few weeks after he resigned from Tourism Minister in the midst of the political crisis triggered by the ramifications of the revelations after the arrest of tycoon Yorgen Fenech as an accomplice in the murder of Daphne Caruana Galizia. Yorgen Fenech was identified as the owner of local power station, having one of the 2 companies (17 Black and Macbridge) which was to pay the secret companies of Konrad Mizzi and Keith Schembri in Panama.

Carmel Cacopardo said that Joseph Muscat should be investigated because when the contract was awarded to Mizzi there was no Tourism Minister and Muscat was directly responsible for the Ministry.

Opposition asks whether Konrad Mizzi will refund €10,700 in consultancy earnings 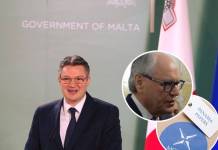 Alternattiva Demokratika stated that Johann Buttigieg signed the contract when Mizzi had just resigned because of his involvement in the Panama Papers scandal.

“The scandal and Mizzi’s involvement in it caused harm to the country. Those involved in such scandals should not be rewarded; Konrad Mizzi should disappear from the public scene” said Carmel Cacopardo.

AD is calling also an investigation on Gavin Gulia because he is MTA’s Chairman.

Carmel Cacopardo stated that the investigation should also establish whether Konrad Mizzi put pressure on officials to be awarded a consultancy, which officials were his ‘dependents’ as a Tourism Minister a few days earlier.