The government has banned larger events in the wake of a resurgence in Covid-19 cases, setting a limit of 300 people in outdoor locations and 100 people in indoor ones.

At a press conference held with Prime Minister Robert Abela, Health Minister Chris Fearne announced that previously-announced limitations, including the need for premises to have an area of 4sqm per guest, would be retained. Additionally, dancefloors will be prohibited, as maintaining social distancing within them has been deemed impossible.

Fearne also announced that the government is also restricting visits to homes for the elderly, which will once more be done through a Perspex screen.

Abela refused to take any blame for the spike in Covid-19 cases, and insisted that Malta could not afford to curtail tourism or other economic activity.

He also insisted that its recommendations now followed those made by Superintendent of Public Health Charmaine Gauci, who had last week signalled her disagreement with the government’s position in favour of holding mass events. 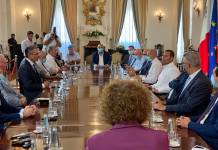 12:24 And with this, the press conference now ends, and so does our live blog.

We'll be opening another live blog shortly, however, when Prof. Gauci is set to brief the media for the first time in over 2 months.
John Paul Cordina
12:23 As for community testing, Fearne argues that the two new hubs should provide sufficient capacity for now.

The situation may change in the future, however, particularly when the flu virus starts spreading once more after the summer months.
John Paul Cordina
12:21 Abela states that the measures announced were intended to avoid the need for further measures in the future.

However, one would be presumptuous to rule them out, as the situation was fluid. To adjust from time to time was no sin; one had to be humble and review one's position.
John Paul Cordina
12:20 The TVM correspondents questions whether the government is considering other measures should the prevalence of Covid-19 continues to rise.

He also makes an economic argument for this: stating that it helps ensure Malta remains on other countries' green lists.
John Paul Cordina
12:14 The minister recalls that two additional testing centres would be set up.

He also questions why weddings would still be allowed when other mass events are restricted, highlighting that the virus would not distinguish between the two.
John Paul Cordina
12:08 Fearne also recalls that no country has enforced mandatory testing on arrivals, though some are considering it.

He states that one had to determine how the logistical feasbility of the process, and that Malta may also consider introducing the measure if it was.
John Paul Cordina
12:06 The L-Orizzont correspondent questions whether tourists should be tested on arrival.

At that point, he said, the European Centre for Disease Prevention and Control (ECDC) was not recommending this at the time.
John Paul Cordina
11:49 The present scenario, he reiterates, was of an increase in cases that was not matched by an increase in serious ones.
John Paul Cordina
11:47 He emphasises that it is particularly difficult to strike a balance when one has no idea when the pandemic will end.

The pandemic may last a few months, but it may also last years, and thus a balance between the economy and health needed to be struck.
John Paul Cordina
11:47 But Abela deflects this, stating that the worst one can do at this stage is lay blame on one another.
John Paul Cordina
11:46 Question time starts, and the MaltaToday reporter questions whether the government accepts any fault for the resurgence in cases.

He also asks whether the government sought to appease certain businesses.
John Paul Cordina
11:46 Fearne appeals to those who are not vulnerable to be considerate of those who are and take all necessary precautions.
John Paul Cordina
11:44 Consequently, carers working in homes for the elderly will have to be tested regularly, and visitors will have to meet their loved ones from behind a perspex screen.

Right now, the journalists are waiting to be allowed inside the hall where the press conference is being held.
John Paul Cordina