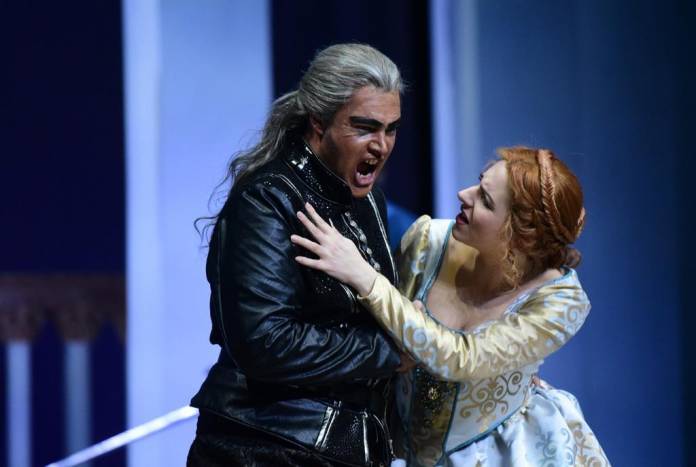 Unless they go to the Pesaro Rossini festival, most opera buffs anywhere would hardly ever be able to enjoy a performance of Rossini’s Otello. Regarding an opera with Otello as the main protagonist, most have grown up with and been nurtured by Verdi’s version. However, it is not the case here for an exercise in comparing the two. I just want to say that the Manoel’s 4- night run was a marvellous experience with mine beginning with attending the dress rehearsal and later, the fourth and last night under review here.

Well, I was well-prepared for it because in an interview with the Manoel’s artistic director Kenneth Zammit Tabona some three or four years ago, as well as in conversation before that, he revealed a long-range vision regarding opera at the Manoel. The Mozart/Da Ponte trilogy, Gluck’s Orfeo ed Euridice is past history now and finally, Rossini’s Otello planned long ago came to life.

Staged by the indefatigable director Vivien Hewitt and located entirely in Venice, the effect projected by stage and cast was a series of Titians which came alive. Vivien Hewitt wanted a traditional staging and that is what was delivered thanks to Ray Farrugia’s stage design and the costumes designed by Vivien Hewitt with the collaboration of Daniele Gelsi. Hers too was the light design. Seamstress Dorothy E. Castillo, with Graziella Sammut and Lilian Fenech, did the rest: an excellent job. Yes, it did look splendidly authentic because the costumes were inspired by original designs by Cesare Vecellio, Titian’s own nephew.
No wonder that the formidable cast consisting of Maltese and Italian singers looked and made one feel a magical authenticity both visually and aurally, thanks to really fine acting-singing.

An added touch to the complex make-up of this opera was that director Marco Mencoboni who extracted the best out of members of the Malta Philharmonic Orchestra with a well-paced reading of the work used a score based on Rossini’s own original and not the edition used when the original MS was believed to have been lost. Eventually, it resurfaced and not only that but Marco Mencoboni discovered a drawing of the original positioning of the musicians in the orchestra pit. This enhanced the sound contributed to this projection.

The joys and sorrows of love

The music is lusciously beautiful, well, it IS definitely and typically Rossinian bel canto, and pretty amazing from the pen of this 24-year old genius. Rossini created very convincing characters, real-life men and women experiencing the joys and sorrows of love, betrayal and intrigue, envy, loyalty and compassion, murderous jealousy and more than a streak of racism. Besides that, there is a rather unusual casting of several tenors and speaking of whom, Cliff Zammit Stevens in the title role was convincing through and through in a well-rounded performance. I would say his voice has grown too. Even more of that I could say of tenor Nico Darmanin who was simply excellent as Rodrigo, another jealous and headstrong character to whom Rossini gave very difficult music to sing, brilliantly carried off in every way. Tenor Roberto Jachini Virgili’s Iago was quite competently handled but he wasn’t frighteningly evil and wicked enough.

The leading lady, Valentina Mastrangelo as the pure, hapless Desdemona was superbly handled in every way. When she made her first solo appearance on stage there was a lovely horn obbligato thanks to Etienne Cutajar. Later when singing the poignant Willow Song the prelude to it and lovely harp accompaniment was by Britt Arend. All loyalty and compassion was the lovely, warm, rich and convincing mezzo-soprano Francesca Sartorato. For depth and warmth, there was bass Albert Buttigieg as Elmiro, Desdemona’s stern “padre-padrone” who relents when it is too late. Smaller roles were those interpreted by tenor Alan Sciberras who sang the Gondolier’s Sing off-stage and on-stage the dusky Lucio faithful friend of Otello’s. One hopes he’ll land bigger roles in future. Despite his young years and thanks to make-up, tenor Stanley Joe Portelli mustered enough gravitas as the Doge. KorMalta coached by Riccardo Bianchi were on cue and were very well-directed.

A lot of work, energy and effort went into this project. This production must not be allowed to die after just four performances. I hope that this “baby” of Kenneth Zammit Tabona’ s and the Manoel will be sold and presented abroad.

Special effects? No, its raining at the Manoel Theatre!