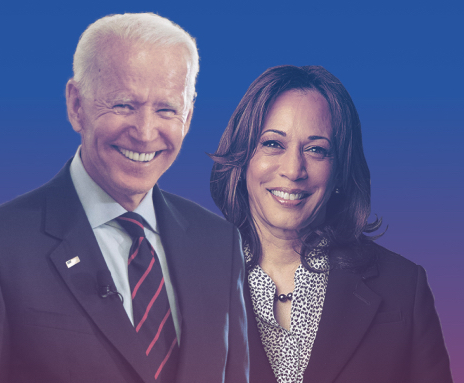 President-elect Joe Biden and Vice President-elect Kamala Harris made victory speeches to the nation on Saturday night in Wilmington Delaware, with both stressing unity for a deeply-divided nation.

Biden appealed for unity and for the United States to begin healing, saying that “this is the time to heal in America”.

He also sought to reach out to President Donald Trump’s supporters saying that he understood their disappointment since he had lost a couple of elections himself.

Trump has yet to concede and has not spoken publicly since his defeat was announced while he was playing golf.

Biden pledged to be a president for all stressing that he seeks “not to divide but unify” and that he does not see “red states and blue states” but only sees the United States.

Harris, 56, the first woman and first woman of color to be elected vice president, was first to take the stage.

She began with a tribute to the late congressman and civil rights icon John Lewis.

She thanked the voters, organizers, poll workers and activists who she said delivered a clear message in what became a referendum election, choosing, she said, “hope and unity, decency, science, and yes, truth!”

“You chose Joe Biden as the next president of the United States. And Joe is a healer, a uniter, a tested and steady hand. A person whose own experience of loss gives him a sense of purpose that will help us as a nation reclaim our own sense of purpose,” Harris said.

Harris who is the daughter of Indian and Jamaican immigrants, also thanked her late mother and the generations of women before her.

“While I may be the first woman in this office, I will not be the last. Because every little girl watching tonight sees that this is a country of possibilities,” she added.

World leaders reacting to US election

Since Biden was announced as election winner, various world leaders have issued statements mostly to congratulate him. Among those who did not, is Mexican president Andrés Manuel López Obrador who said that he would not congratulate a winner of the US presidential election until legal challenges are concluded, in an apparent bid to avoid friction with Washington during the transition.

Iran’s Ayatollah Ali Khamenei described the US election as a “spectacle” and said that it was an example of the “ugly face of liberal democracy”. Similarly, Alexander Lukashenko who has been facing nationwide protests since after his election in the former USSR nation of Belarus, where his own election was widely viewed as rigged, condemned the US election result and described it as “a travesty of democracy.

Here is what some of the world leaders had to say after the election was called for Biden:

In a statement, von der Leyen said: “The European Union and the United States are friends and allies, our citizens share the deepest of links. Together we have built an unprecedented transatlantic partnership rooted in common history and shared values of democracy, freedom, human rights, social justice and open economy. This partnership has underpinned the liberal rules-based international order for decades and remains a pillar of stability, security and prosperity on both sides of the Atlantic.”

New Zealand’s Prime Minister Jacinda Ardern congratulated Biden and Harris on their victory. In a statement, she described Biden as a “close friend of New Zealand” when he was Vice President to Barack Obama.

“The relationship between our two countries is strong, and I look forward to developing even closer relations with the incoming Biden Administration,” Ardern said.