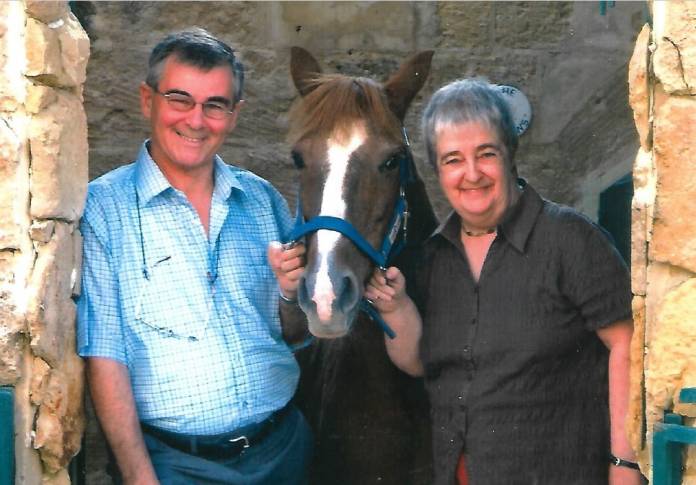 Sandra Felice-Pace, nee Thornton, was born with a congenital condition that involved some minor and sometimes major operations throughout her growing up years.

Born on the 18th March 1944, she was brought up in the City of Salford, Lanchasire, UK. Still in the pram her mother noticed that Sandra had an unusual liking for horses and that she would go into fits of delight as she encountered a horse and cried when no horse obliged to show up. Her mother, conscious of the pain her child suffered, she used to frequently visit stables where brewery’ shire horses were kept.

A dark period in Sandra’s early life occurred when doctors advised her parents to send her to a children’s home to convalesce. During that month she had no contact with anybody. But she discovered a horse in a nearby field and spent most of her day there with only a fence to separate them.

On the 2nd February 1955, Sandra was hit by a lorry on her way to school. It was a near fatal accident. Again, she received great comfort with all the pictures of horses she was sent by the general public to cheer her up while in hospital.

Adulthood brought relief to her, although she still had the occasional operation. She had a successful career in social work and eventually specialized in fostering and adoption after getting the highest qualification in social work at the London School of Economics.

I had met Sandra in Oxford in the late 60s and brought her to Malta in summer 1970. On a day visit to Gozo she fell in love with the island and told me that if ever we settled here, it would have to be in Gozo. She described both islands as a “horsey paradise”. We eventually bought an old farmhouse in the village of Għasri in 1987 and became residents in 1992.

Sandra first book was titled ‘…and close encounters of a horsey kind in Malta and Gozo’ published in October 2019.

By 2010, her childhood medical problems caused her lack of mobility. One day she asked me whether I would find time to type something for her. She dictated about 900 words going through her early childhood’s obsession with horses. Months later she asked me to give her back her essay, she read it a few times and then, she just said to me: “there’s an embryo of a book in there, will you help me if I just dictate to you?” It was July 2011.

She had an inner struggle about telling the story of a difficult childhood. What she wrote was a form of catharsis as the norms in those days prevented her from expressing her suppressed feelings and horses became a diversion from reality.

Sandra then started recollecting stories about the many horse owners she met on our visits to Malta and Gozo. One of the characters who played a big part in our lives was a man known as Frans tas-Sufu who was a karrozzin owner. We met him at the Strand in Sliema in 1971 and he was delighted that Sandra took a shine to his horse. He became our friend and we visited his stables at San Gwann.

On our visits to Malta, our stays in Gozo were becoming longer. We made other friends there by just stopping to admire horses. Sandra soon learnt that while in her country horse’ owners were very reluctant to let you get anywhere near them, the attitude in Gozo was entirely different; they took pride in their horses. At the road races and the Santa Marija show at Villa Rundle in Victoria, Sandra had her fill of patting horses. Then came what Sandra called in her book a ‘eureka moment’, a chance meeting with Frans tas-Sufu at Sannat, holding a tethered young pony. He introduced us to a horse breeder and trader called Vestru tat-Tirjolin who invited us to visit his stables while in Gozo.

One day I connived with Vestru to buy Sandra a filly which of course fulfilled her childhood dream. We named her Sugar and she became the centre of attention in the village of Għasri. She also had a foal which we called Beauty. Sugar lived with us for 27 years and died in April 2016.

We finished the book together after a lot of revisions but when we were ready to go to print, Sandra had a bad fall and the last thing on our minds was the book. However I did promise Sandra that the book would be published come what may. She just gave me a smile whenever I mentioned the promise at the Gozo hospital where she died on the 9th April 2019.

After the funeral I decided to stand as a candidate for the local elections and I was elected in Għasri. Once elected, I turned my attention to the publication of Sandra’s book. I wanted someone who had knowledge of horses and I spoke to Betty Berry, known in Gozo for her pioneering work in animal welfare to do the proof reading. Both Sandra and I knew her and what’s more she knew Sugar too. She did a professional job and wrote a wonderful foreword. I set the date for publication for the 26th September 2019.

Then I concentrated on the launching of the book with the help of the Parish Priest of Għasri Mgr Edward Xuereb who allowed me to hold the event at the Parish Church.

Sandra had instructed that in the event of having her book published the proceeds should go towards a good course. I chose the Arka Foundation as the main beneficiary. The then-Bishop of Gozo Mgr Mario Grech and I agreed that the event should be linked to Pope Francis’ encyclical letter ‘Laudato Si’. The Bishop who had been very attentive to Sandra during her ailing years checked his diary and told me that he will be available to preside over the event.

Mgr Xuereb allowed me to use the front of the altar with exhibits related to Sandra and her beloved Sugar.

As I welcomed the Bishop, he anxiously asked me how long the event would be. Weeks later at the Curia where I presented him with Sandra’s book, he told me the day after the launching he had had an appointment with the Pope for lunch and he still needed to see some people in Malta before he got on his early flight.

I was able to give the Arka Foundation €800 (including some donations) from the sales so far. Covid-19 stopped me from attending and organising promotional events.

The second book is a ‘Book of Verse: Shepherds, Sheep and Lambs and other reflections’, which was published a few days ago.

Among Sandra’s papers there was a set of poems which went through our journey of working on a sheep farm in North Wales for 30 years. Sandra loved being close to sheep and lambs, but she also found in the farmer Dwyfor Jones a person who through his care for his sheep brought her closer to the image of the Good Shepherd. Jones died in October 2019.

I wrote the foreword myself as I was the main witness to both Sandra’s joy at working with sheep and lambs and her increasing love for the Good Shepherd. Having dedicated the first part of the book to Dwyfor Jones, the second part featuring shepherds and lambs in the scriptures, I dedicated it to Bishop Mario Grech. He knew Sandra and I as friends and had honoured us by celebrating Mass by her bedside on our 40th wedding anniversary. The third part has a few reflections which I dedicated to Mgr Edward Xuereb who brought Holy Communion to her every week and invited her to participate in the Supper of the Lamb.

From every sale of this book of verse, €5 will be donated for the upkeep of the historical Basilica of Our Lady of the Patronage at Għasri Valley where Sandra worshipped for a number of years.

You may contact Salvu Felice Pace via email: sfelicep@gmail.com.