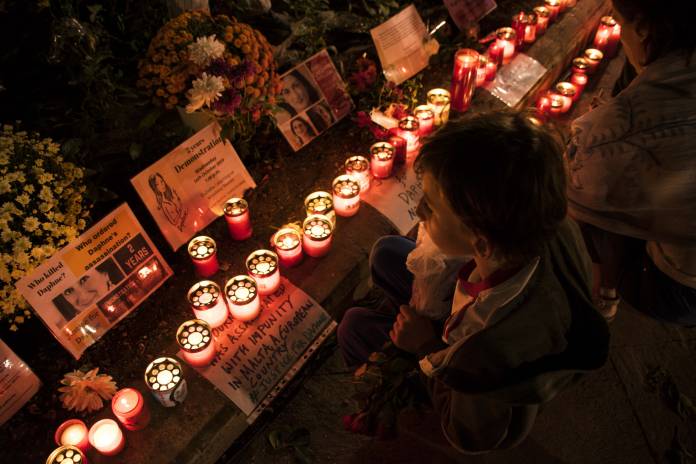 Following mass at St Francis Conventual Church in Valletta, a march starting from in front of Pjazza Teatru Rjal was organised by rule of law NGO Repubblika and pressure group Occupy Justice.

‘People need to understand what happened in Malta’ – Palermo Mayor

The Mayor of Palermo opens the vigil tonight imploring the crowd to ‘tell the story of Daphne to everybody to let the people understand what happened in Malta.’

He added that if they were able to take down the Mafia in Palermo, the same can be done in Malta.

‘The State is failing us’ – Norman Vella

“Had the state protected Daphne, she could have been still around,” Former TV journalist and presenter Norman Vella. He said that protection does not simply mean having a police officer stationed outside her door. Protection is something we need and have a right to.

“Protection comes with action,” Vella said explaining that those who should investigate and act against crime, should be doing their work without hesitation.

“The Maltese State is in a pitiful state,” he stated. The state is obliged to protect its citizens; anything less than that is unacceptable, Vella added.

Vella said that passiveness in front of criminality and corruption is crime which makes think that it is accomplice to it. He also spoke about ‘State capture’, and the failure to protect the citizen’s rights when the State sanctioned actions such as the repeated removal of the protest memorial.

Daphne Caruana Galizia’s niece, Amy Mallia, has told the vigil that when she was at school the children would taunt her and tell her that it would be better if someone had put a bomb under her chair as well.

‘The world sees what is happening in Malta’ – Rebecca Vincent and Christophe Deloire, Reporters  Without Borders

Rebecca Vincent and Christophe Deloire, of the UK bureau of Reporters Without Borders, tells the vigil that the world is watching what is happening in Malta.

They add that this is the second anniversary of the assassination that has past without justice for Caruana Galizia.

RSF participates in a demonstration in Valletta in honor of #DaphneCaruanaGalizia, RSF also participates in the vigils taking place in London, Brussels, Berlin and Vienna. @cdeloire @rebecca_vincent
https://t.co/1OSKAD1Xu9

Don Luigi Ciotti, who is known for his fight against organised crime and the Mafia, told those gathered that Daphne was killed for seeking the truth. “She did not look away when faced with injustice,” he said.

Ciotti added that Caruana Galizia was rightly convinced that access to information is one of the pillars in a democracy in a society which is free and responsible, where truth and justice are protected and where every person’s dignity is recognised.

“Daphne was guided by these principles,” he affirmed, saying that before going back to nationalism, instigators of war, dictatorships and poverty, Europe offered many examples such as these.

Ciotti delved into the current international political climate, as the far-right and anti-immigration rhetoric is on the increase. He reminded that the West has a huge responsibility when it comes to the plight of asylum seekers and refugees:

“They are forced to flee from a political economical system that has colonised the planet, preyed on territories and reduced goods which are indispensable for life.

“What was exported?” he asked, explaining that it was the “ruthless logic of profit inevitably surrounded by mafia and corruption”.

Caruana Galizia sought to fight the plunder of rights through her work; writing, denouncing and seek di truth. A fight which put her life in danger, similar to other journalists who are at the service of the truth and who run into great risk paying a high price.

“It is not enough to remember Daphne,” Ciotti explained, “One has to make a personal commitment to building a world which is more human and just, where democracy is not a word used to cover dirty interests and power games”

Martina Farrugia has said Daphne Caruana Galizia’s murder is outrageous and two years on, the mastermind behind it, has still not been found.

It is not pretend when a journalist writes about scandal after scandal concerning public officials. It is not acceptable that harsh action is not taken against those who abuse the system.

It is not pretend when someone dares to threaten a journalist, tries to burn down their home, kill their dogs.

Farrugia appealed to people to make a stand. She explained that change is not easy but that apathy has to end.

Former Member of the European Parliament Ana Gomes has said that those who have been exposed by the Panama Papers are still in office.

Gomes was making reference to the Maltese Tourism Minister Konrad Mizzi and the Prime Minister’s Chief of Staff Keith Schembri.

‘When we lost Daphne, we lost a piece of media freedom – Tajani

Antonio Tajani told the vigil that the loss of Caruana Galizia meant we lost a piece of
our media freedom.

The former President of the EU Parliament said this a video message broadcast during the vigil as he was unable to be present.

‘In a career of over 30 years and more than 20,000 articles. Daphne exemplified the best part of the journalism profession, the search for truth.’

He explained that freedom of expression is a pillar of democracy and human rights, adding that the European Union would be a dangerous place if the correct information could
not be guaranteed to citizens.

He recalled how the investigation being carried out into her assassination has not revealed the person who ordered the murder.

“We still don’t know who decided to kill Daphne Caruana Galizia,” Tajani stressed. He also said that “Daphne’s example will inspire many girls and boys to end the fatigue of truth and search for it.”

The president of the Maltese rule of law NGO Repubblika Vicki Ann Cremona, has told the vigil that for those that have read her work, knew that Caruana Galizia was someone with the courage to expose Malta’s dirt.

Cremona added that it was important that the Maltese unite to fight against corruption in the country.

“Allow all citizens to express their views regarding development” – The KA

European Parliament pays tribute to the Mayor of Gdansk