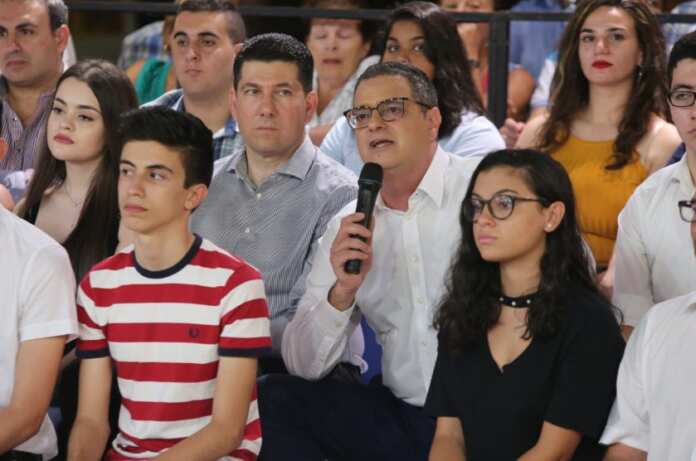 Dr Adrian Delia, the leader of the Partit Nazzjonalista, strongly criticised the government repeatedly describing it as a non-caring government without a plan of action for different sectors of society. He was speaking during the Independence Day celebrations organised by the party on the Graneries Floriana.

Towards the end of his speech Delia said that he will strive towards party unity. He thanked for their contribution to society and the party Ġorġ Borg Olivier, Eddie Fenech Adami and Lawrence Gonzi. He stopped short of thanking his predecessor Simon Busuttil.

According to Delia, during these times which the government describes as the best of times (l-aqwa żmien), 70,000 persons are in the risk of poverty, some 20,000 persons do not afford to buy a second pair of shoes, and others are homeless. “If this is happening in the best of times, than what are we to expect in the worst of times” asked Delia.

The generation of wealth is positive, he said, however it government responsibilty to  distribute in a just way the wealth generated. However, according to Delia, money is being generated by businesses, while the government is creating poverty.

A need for a long term plan

The leader of the Partit Nazzjonalista strongly criticised the Attorney General accusing him of breaking the constitution and being a threat to democracy. He said that he filed a constitutional case against the Attorney General because he created a political imbalance by giving the Prime Minister a full copy of the Egrant inquiry report and giving just a few pages to the rest of the country.

Reaching out to people

The Partit Nazzjonalista, says Delia, will not miss a day in opposition, without reaching out to the people and showing them that the PN is a responsible opposition.

The leader of the PN said that the party has to realise that it has not only lost  the previous two general elections, but it has been losing votes for a number of years, in both local council and MEP elections. According to Delia, as years went by, the Nationalist Party started isolating itself from the people.  When meeting people, one is obliged to listen to them as this is what a political party is obliged to do. The Nationalist Party will not isolate itself from people, said Delia.

Regarding the financial position of the party, Delia said that huge debts had been accumulated over the years. It is not in the Party’s plans to inflate or maintain this debt he said while promising that the party will pay this debt  over a period of 10 years.

Delia stressed that the doors of the party are open to everyone. The Party, said Delia is the one which was always there, in our country’s history, looking ahead with a vision. He criticised the Labour Party as a party without vision who is not taking care of people’s security.

Delia concluded by saying that “It is not safe to walk on the streets under Labour. Come walk with us.”