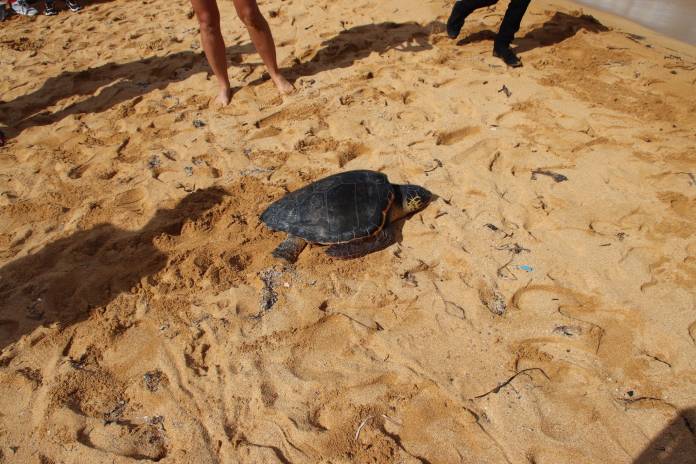 A 19-year-old loggerhead turtle by the name of Tama due to its miraculous comeback, has been released at Golden bay.

The turtle has been in rehabilitation since October 2015 following a head injury, a shell crack and a severed flipper due to a propeller hit. Tama spent several months at the Turtle Rehabilitation Unit, Forti San Lucjan in Marsaxlokk were it had to be force fed after refusing to eat. The turtle was cared for by Nature Trust FEE Malta and the Wildlife rehabilitation team that nursed it back to health under the medical observation of veterinary surgeon Dr Anthony Gruppetta.

The turtle which weighs around 47 kgs has been fitted with a satellite tracker kindly sponsored by MAPFRE Malta so that its journey back into the wild could be tracked also for research purposes.  Tama was released in the presence of 40 students who are presently participating in the Young Reporters for the Environment – Litter Less campaign. Present for the occasion were also a group of students from an informal NGO – Higher Youths that have kindly sponsored the turtle’s rehabilitation programme and have been following closely its progress.

Prior to the release, students and volunteers carried out a clean-up of the beach were they also logged information on the prepared data sheets to investigate the various waste streams that end up on our beaches.

Nature Trust President said that while it is sad to say goodbye to Tama that has been with us for years yet we are so happy to set him free again as a now healthy turtle.  We called him Tama (Hope), because when we rescued him way back, he was in bad shape and close to death.  Only our determination and dedication of the Volunteers and VET managed to get him back to full health and adapt with one missing flipper. This is a happy day for us all.  He leaves me with a memory that I nearly lost one finger while force feeding him, but seeing him depart free and in full strength is a motivation for us all to keep on our work.  Thanks goes to MAPFRE for their full support to track him and follow his new adventures.  A tracker costs close to €5000 so such support is truly great.”

Felipe Navarro, President and CEO of MAPFRE Middlesea, said, “It really was an amazing experience, and in some ways inspiring, to finally see Tama being released out into the ocean. To think that this turtle, which once upon a time was found severely injured, and is now able to venture out into the sea as a result of the sheer determination and dedication shown by Nature Trust, is nothing short of inspiring. Now, we cannot wait to see where Tama will travel to next during his long-awaited journey.”