“I really feel like I do not know what hit me.” This was the opening gambit of a smiling Cardinal-Elect Mario Grech as he settled into an interview with Newsbook Q&A. Not for this Gozitan the fancy titles, as he insisted we call him Dun Mario. His reaction to the announcement was one of bewilderment and it took him completely by surprise. “Well, for me this did not mean all that much. To be honest, it meant more to me when His Holiness called me a year ago to tell me that he had made me Secretary of the Synod of the Bishops,” confided Dun Mario. He added that ultimately his work will remain what it is and will have some additions. Describing himself as ‘a strange animal’ Dun Mario, however, was pleased at the positive general reaction with which the announcement was received. 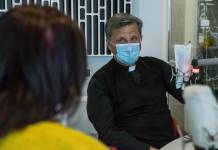 If for Dun Mario, the announcement was a surprise which he quickly dimensioned, for his family it was quite another matter. “I called home repeatedly and my father could not speak to me, so full of emotion was he. I even called up Fr Eddie and my siblings to ask them to pop over home to make sure that all was ok,” said Dun Mario.  He described his elevation as ‘a grace and a responsibility’, adding that sage words of a brother in the priesthood who wrote to him saying that he had now reached the pinnacle, not of glory but of responsibility.

Mother: took it in her stride

The news which silenced his father, did not phase his mother in the least. Speaking to Newsbook Q&A Mrs Maria Stella Grech said that she took it mostly in her stride. In the direct and pithy responses, one could feel the legacy which her son was carrying. Describing her reaction as ‘remaining normal’ Mrs Grech said that different people react differently, indicating that her husband had indeed had a strong emotional reaction. “I never expected him to reach this position,” said Mrs Grech, adding “Many had wished and augured many things but things happen when they happen.” Her advice to her son? “Whatever you do, do it for the glory of God and the greater benefit of souls,” said Mrs Grech. “This is my mother’s simple antiphon,” smiled Dun Mario who acknowledged his mother’s leadership in the family prayer time. “When I am at home, she still calls me to say the Rosary,” smiled her reverend son.

Read Also
Watch: Elect Cardinal about corruption in the Vatican and gays 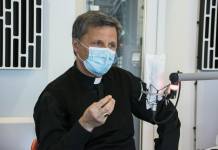 Dum Mario said that his typical day starts early with prayers and mass. At work he normally goes through a series of meetings, adding as an aside that he is also starting out on this job and getting to know the rules. Dun Mario currently resides with the Augustinian friars and his evenings are spent reading and going for walks. Exercise, he said is a necessity since his life is a sedentary one and, in agreement with Newsbook, the food is quite excellent. Uprooted from an established social structure, Dun Mario said that he is seeking to ensure that he does not lapse into loneliness, a peril for many who work abroad.