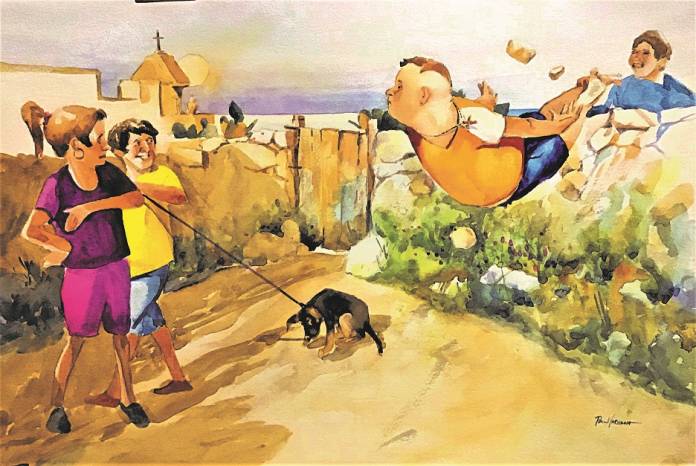 A Maltese proverb flashes a red light to those men about to retire from work: ‘Raġel id-dar taġen fuq in-nar’ the proverb goes, which literally translated would read: ‘A man at home is like a pan over a hot stove’.

Once a man retires and spends endless hours at home, the chances are that the wife would start nagging, “Do this, do that. Go buy this and that and don’t spend too much. Don’t sit there doin’ nothing. Go clean the washroom. Take the dog out for a walk, then feed the cat.”

This is how watercolourist Paul Caruana describes one of his 20 works he will be exhibiting at Palazzo De Piro in Mdina between the 4th and 31st October. The show, titled Seeing Voices, Ilħna li Nara transports viewers to how life turned out in the early 1970s. It will be inaugurated at 7.30 pm on the 4th October by H.E. Ugo Mifsud Bonnici, President Emeritus.

One of the watercolours features Ġaħan, the simpleton who took words too literally. Ġaħan jerks the door off its jamb and carts it away to church where his mum is hearing mass, to the congregation’s bewilderment. Ġaħan, may quite reasonably ask: ‘It was mum who asked me to pull the door behind me. What wrong have I done?’

“The exhibition bears the title Seeing Voices, Ilħna li Nara because certain voices I hear conjure neighbours of yesteryear. That’s where I got the inspiration for these watercolours”, Paul Caruana said.

Another painting shows Toni, il-Gundulaj, a wiry, weather-beaten man who used to dive for rocks, ferry them ashore on his fregatina, break up the rocks with a stone chisel and a hammer to fish out the sea dates from their limestone bed. Dates that tasted of the invigorating sea.