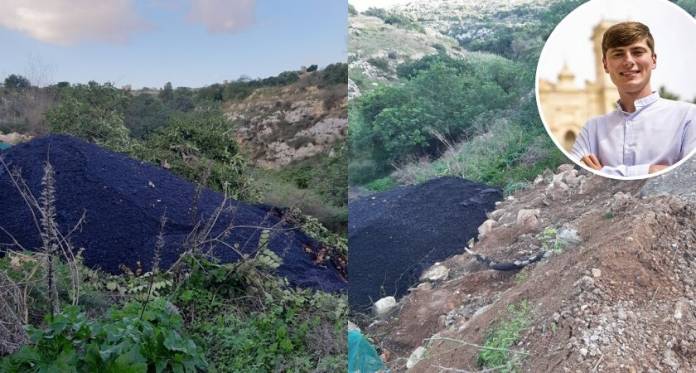 Ħaż-Żebbuġ Local Councillor Steve Zammit Lupi has raised the alarm over asphalt which ended up in Wied Qirda after the path beneath the loaded truck gave way. As a result the asphalt ended in the valley while the truck had to be lifted by a crane. While the driver escaped unharmed, the asphalt remained in the valley.

In a Facebook post, the independent local councillor described the incident as ‘the rape of natural environment’. He explained that the path was being widened to ‘improve’ access however this was done without the ‘necessary permission’.

Wied Qirda which lies on the outskirts of the town has been in a state of neglect for several years.

The path tripled in size while some trees, bushes, rare flowers and branches of a carob tree were cut down as a result.

Zammit Lupi added that the asphalt ended up in a heap in the valley, after the path gave way while a loaded truck was passing over it. As a result the truck had to be lifted out the valley using a crane.

A report was filed with the environmental watchdog last week, Zammit Lupi explained.

The Local Council has asked for investigation and requested that works are immediately halted.

Newsbook.com.mt has sent questions to the Environment and Resources Authority which remained unanswered until the time of writing.