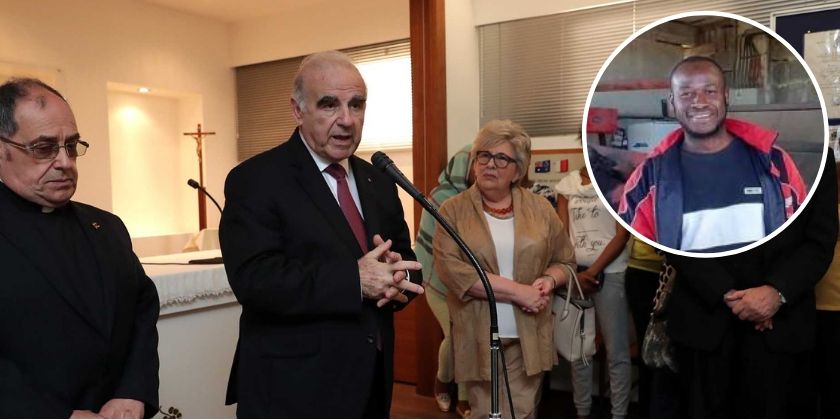 The President said this during visits that he and his wife made at Dar l-Emigrant in Valletta and the Good Shepherd Sisters (Bon Pastur) in Balzan. Both entities offer their services for free to migrants that come to Malta in search of a better life than the one of poverty and war that characterises their countries of origin.

At Dar l-Emigrant, the President and his wife were welcomed by Mons. Alfred Vella and Mons. Philip Calleja and also met with a number of migrants that benefit from the entity’s services as well as number of volunteers.

Whilst thanks the commission and the volunteers for their invaluable work, President Vella said that the Lassana Cisse Souleymane has left “a blot on the Maltese conscience” and said that Maltese condemn such acts.

Mons. Vella said that the Migrants Commission provides 400 beds for migrants in 14 different locations, and how the Good Shepherd Institute is one of them. He also explained how the functions of Dar l-Emigrant have changed over the years.

The President and his wife also visited the archives which holds 12,000 passport applications of Maltese that have migrated aborad in the past, as well as 30,000 applications from migrants that have asked for asylum in the past 50 years.

John Paul Cordina   August 14, 2020
A 47-year-old man is awaiting sentencing after pleading guilty to stealing diesel from a number of vehicles in Gozo.

Monique Agius   August 14, 2020
The MEA said that the government opted for selective consultation with lobbyists, resulting in a misguided repositioning of Malta’s tourism product. The association noted that after months of sacrifices and financial packages aimed at keeping the situation under control, the new restrictions have resulted in massive hotel cancellations.