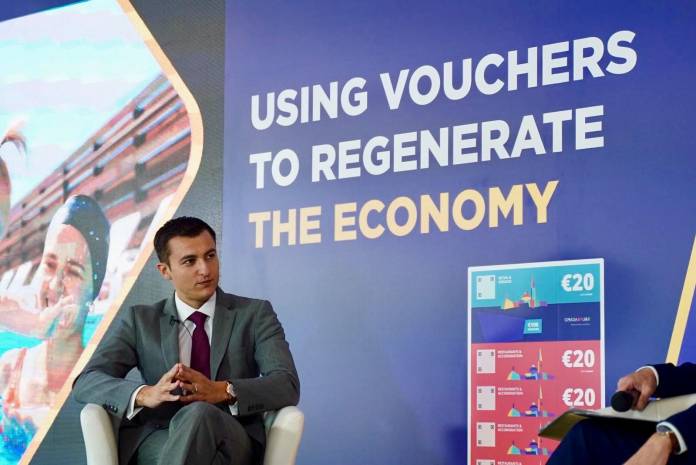 A total of 81.2% of the €100 government vouchers have been used or redeemed so far, with the government estimating that they have brought about an economic injection of €52.6 million.

Economy Minister Silvio Schembri revealed the figure during a business breakfast entitled ‘Using Vouchers to Regenerate the Economy,’ and said that by Wednesday, around 1.8 million vouchers had been redeemed.

Malta residents were each given five €20 vouchers, of which four were red vouchers which can be redeemed in hotels and restaurants. They also received a blue voucher, which can be used on retail and services provided by businesses which had to close when the pandemic arrived in Malta last March.

Red vouchers appear to have been somewhat more popular than the blue ones, as 1.48 million of them (81.4% of the total) have been redeemed, along with 0.34 million blue vouchers.

The government estimated that the multiplier effect stood at €7.16 for red vouchers and €16.42 for blue ones, thus calculating that red vouchers generated a total spend of €40.2 million, while the blue ones generated €12.4 million in expenditure.

By the end of October, the government estimates that the initiative will inject €65 million into the economy.

“Through the €100 government voucher scheme, we have assisted a significant number of businesses. We have achieved the aim of the regeneration of the economy plan, which was to address specific issues within the market, particularly those which were severely impacted by the pandemic,” Schembri said.

Statistician Vincent Marmara also carried out a survey analysing the impact of the voucher scheme, with 85% of respondents stating that it helped both on a personal level as well as a contributor to the economy.

96% of the respondents also expressed interest in the re-issuance of the vouchers’ initiative during the winter months, with 54% stating that ideally, the next round of vouchers would be issued during the Christmas period.