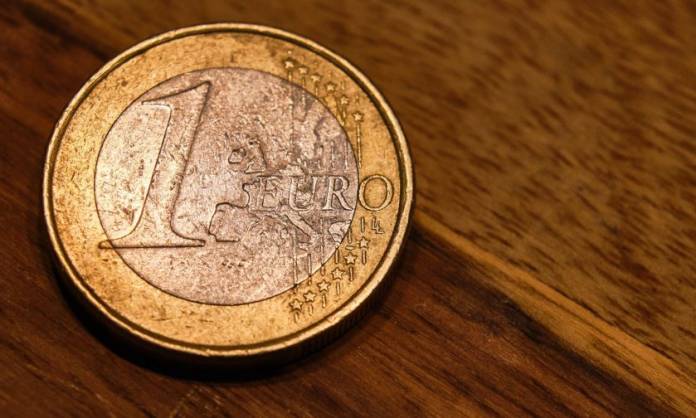 Malta’s Material Deprivation Rate (MDR) dropped by over half in four years, the government’s Pre-2020 Budget document has claimed. However, recent figures from the National Statistics Office show that those at risk over entering poverty are over 78,000.

The MDR in this case looks at individuals and household’s ability to cover expenses like taking a one-week holiday from their home, buying white goods like a washing machine, television or telephone, car or even the ability to pay rent or utility bills.  If people cannot afford these basic items, they are regarded as materially deprived.

According to the report, these gradual declines are regarded as, ‘better than that of the EU average when it comes to inequality and at-risk-of-poverty indicators, however the long-term sustainability of Malta’s welfare model remains contingent on a balancing act between pressures for greater generosity and broader budgetary pressures in light of ageing.’

This, the report states, is based on a range of policy measures which included Affordable Housing Benefit, which would reduce the AROPE rate by 0.06%, an increased child allowance for families with salaries below €20,000 Euros reducing the rate by 0.07%. There is also an income tax ‘rebate’ of €40 and €68 Euros for workers on less than €60,000, resulting in a 0.12% decrease in the AROPE rate. Finally, the report adds that adding €2.17 to a pensioners’ Cost of Living Adjustment (COLA), would result in an estimated decrease of 0.16% in the AROPE rate.

These details regarding declines in Malta’s poverty rate come as part of the Finance Minister’s Pre-Budget announcement, ahead of the official delivery of Budget 2020 to Parliament this October.

During Tuesday’s press conference in Valletta, Scicluna said that the government would be presenting a concise reflection of country’s economic and competitive progress. The document also touches on economic gains distribution as in his words economic growth needs to be inclusive.

Over 78,000 people below poverty threshold

The Pre-Budget announcement about the government’s intentions for reducing the risk of poverty, come only a few weeks after the publication of the National Statistics Office outlined that over 78,000 (78.685) people are now below the newly updated poverty threshold. Of this total, just over half (41,672) were females. Males made up 37,013.

According to Malta’s contribution to the European Statistics on Income and Living Conditions (EU-SILC) 2018, these over 78,000 people earn €8,868 on average.

The EU-SILC study also examined the 9 factors of Material Deprivation rate among those surveyed.  NSO was able to determine that just over 30% of households in 2018 were unable to afford a holiday. This was just a few percentage points less than 2017 figures (34%). 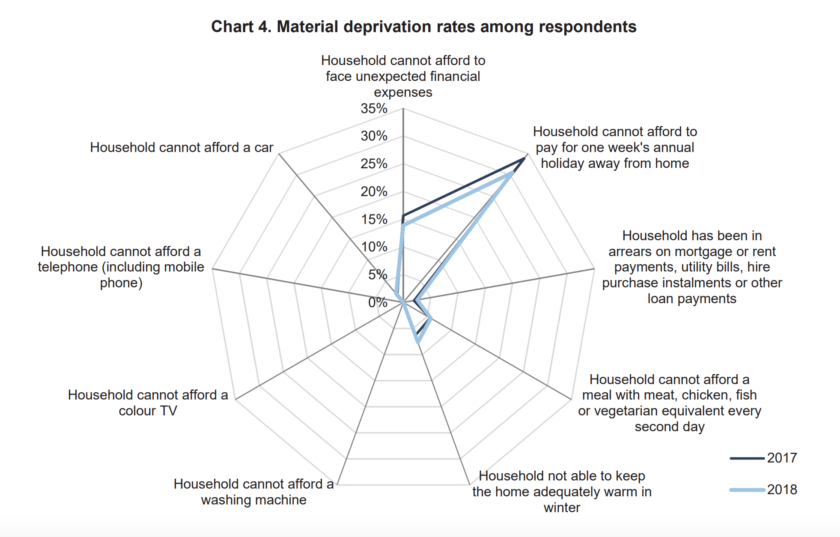 Households unable to ‘afford a meal with meat, chicken, fish or vegetarian equivalent every second day,’ remained unchanged at 7%.

Interestingly, according to EUROSTAT’s 2018 addition of the ‘Living Conditions in Europe’ Report, the number of Single Adults with dependent children was recorded as 21.9%, just over 6% higher than the EU-28 average (15.7%) in 2016. Overall, Malta recorded a much lower average of Material Deprivation by Household compared to the EU average. Greece recorded the highest total’s, 19.1% for Households with Children and 26.1% for Households without. 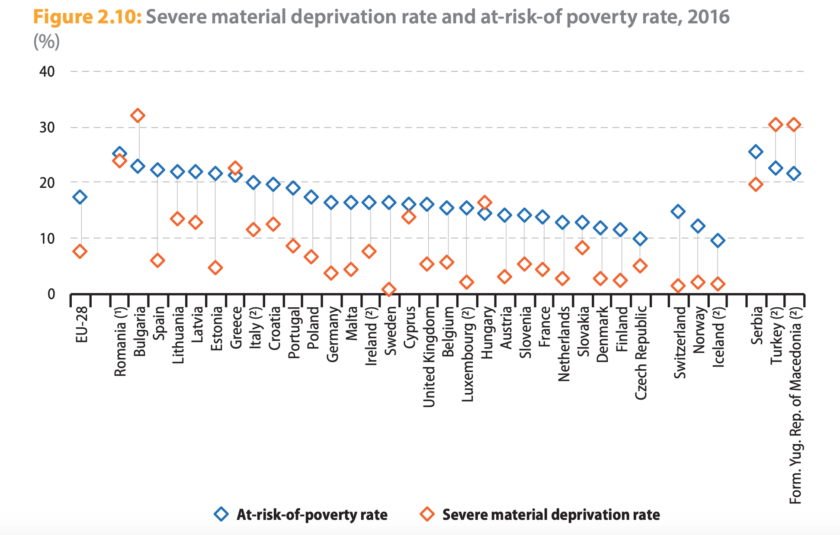 Those unable to afford three items made up almost 6% of Malta’s share of materially deprived share of the population. Less than 4% made up those who could not afford 4 or more. 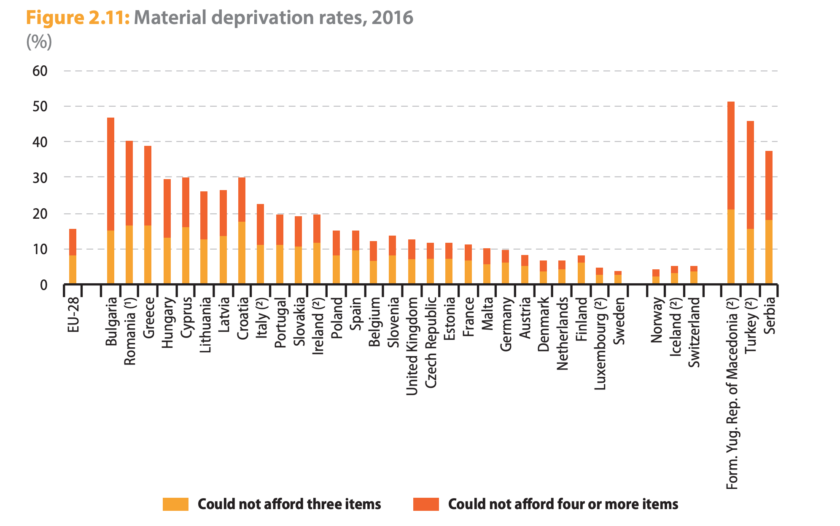