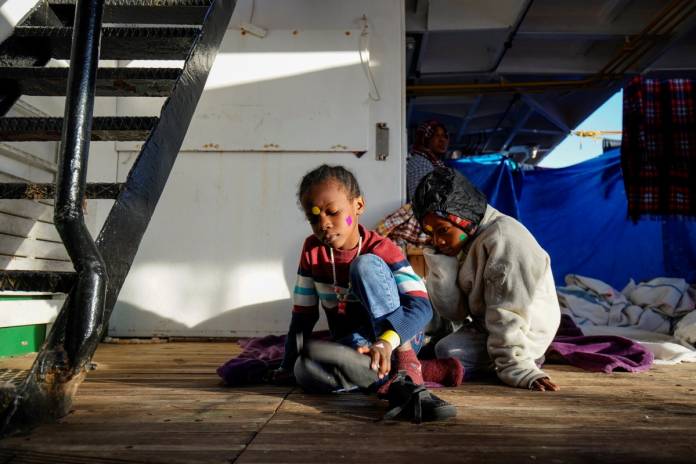 76 migrants, including two toddlers, disembarked in Malta at around 11.15am. This was confirmed to Newsbook.com.mt by a spokesperson for the Armed Forces of Malta (AFM).

On Twitter, the humanitarian NGO Alarm Phone said that yesterday they were alerted that a boat fleeing Libya was in distress, which includes 13 women and several children.

The migrants taken on board on Wednesday included two children under the age of five.

According to Reuters, one young man from Niger was suffering from gunshot wounds which he said were sustained in a Libyan detention centre in early November.

“We would like a response from a functional government, which leaves Italy or Malta. The closest safe port to us is in Italy,” said Open Arms mission chief Ricardo Gati. “We’re waiting to see what the response is and how long we have to wait.”

The organisation added that they lost contact with the boat at around 6.30pm yesterday evening. The Maltese and Italian authorities were informed, yet both were believed to have “refused to take responsibility”.

It is the latest rescue by the Open Arms vessel in the Mediterranean, where more than 1,000 migrants on their way from north Africa to Europe are believed have drowned or are missing so far in 2019, according to UN figures.

This summer, the NGO was involved in a weeks-long standoff with the Italian government, with nearly 100 migrants crammed on board Open Arms in deteriorating conditions, which ended when an Italian court ordered authorities to open its port.

Little Peeps Mini Town is back this February

Coryse Borg   January 29, 2020
For a limited time only, Little Peeps Pop Up Town will soon return to Malta to create a world in which 'little ones can play big'.

Reuters   January 28, 2020
The two leaders discussed the need to eliminate foreign interference and maintain the ceasefire in Libya.

Luisa Apap   January 28, 2020
Via a Facebook post, the NGO said that the honeymoon for Prime Minister Robert Abela is now over.

AD calls for investigation on who engaged Mizzi as MTA consultant

January 29, 2020
We use cookies to ensure that we give you the best experience on our website. If you continue to use this site we will assume that you are happy with it.OkCookies Policy