506 active coronavirus cases were reported between Monday 5 and Sunday 11 October by the health authorities.

During the same period 209 patients were declared to have made a recovery.

On Sunday, a 67-year-old man became the latest coronavirus victim after having tested positive on 1 October. The man was receiving treatment at Mater Dei Hospital.

To date, the pandemic has claimed 42 lives.

Cases over the past week have continued to surge relentlessly. The lowest amount of cases were reported on Tuesday with 47 cases while over the past three days 270 cases were recorded. On Monday, Malta registered 57 cases, followed by 68 cases on Wednesday, 64 cases on Thursday and 75 cases on Friday.

On Saturday, the second highest daily tally was recorded after 100 cases were registered, six cases shy of a record set on 16 September when 106 cases were detected.

It is not known whether more patients have been admitted to intensive care.

Patients in intensive care
Watch: 3 patients aged between 35 and 59 in ITU due to Covid-19 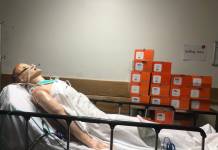