At least five U.S. police were hit by gunfire during violent protests over the death of a black man in police custody, police and media said, hours after President Donald Trump said he would deploy the military if unrest does not stop.

Trump deepened outrage on Monday by posing at a church clutching a bible after law enforcement officers used teargas and rubber bullets to clear the way for him to walk thereafter he made his remarks in the White House Rose Garden.

Demonstrators set fire to a strip mall in Los Angeles, looted stores in New York City and clashed with police in St Louis, Missouri, where four officers were taken to hospital with non-life-threatening injuries. 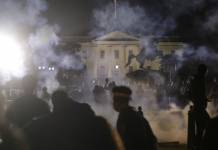 An emotional St Louis police commissioner, John Hayden, said about 200 protesters were “jumping up and down like crazy people”, looting and throwing fireworks and rocks at officers.

“We had to protect our headquarters building, they were throwing fireworks on officers, fireworks were exploding on officers,” he told reporters. “They had officers with gas poured on them. What is going on? How can this be? Mr Floyd was killed somewhere else and they are tearing up cities all across the country.” 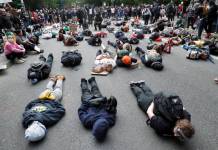 A police officer was also shot during protests in the Las Vegas Strip area, AP news agency said, quoting police. Another officer was “involved in a shooting” in the same area, the agency said.

It gave no details of the shootings or the officers’ condition. Police declined to comment to Reuters.

Trump has condemned the killing of George Floyd, a 46-year-old African American who died after a white policeman pinned his neck under a knee for nearly nine minutes in Minneapolis on May 25, and has promised justice.

But, with anti-police brutality marches and rallies having turned violent after dark each day in the past week, he said rightful protests could not be drowned out by an “angry mob”.

Floyd’s death has reignited simmering racial tensions in a politically divided country that has been hit hard by the coronavirus pandemic, with African Americans accounting for a disproportionately high number of cases.

Amy Borg   July 4, 2020
In a statement, the German MEP and European Financial and Economic Policy spokesperson Sven Giegold stated that hanks to the cross-party support for the adapted joint draft, a positive vote in plenary next week is certain.