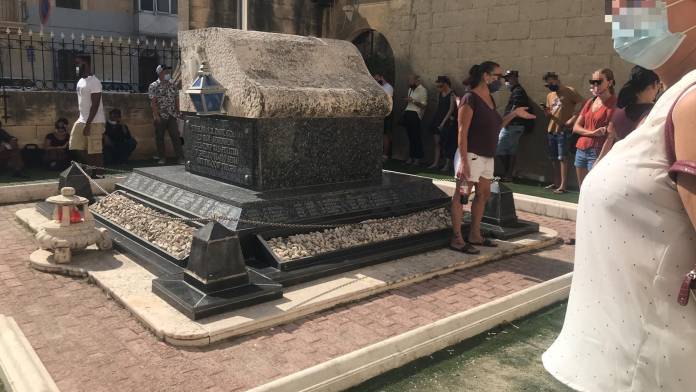 People who in the last few days went to collect their conduct from the Police Headquarters informed Newsbook.com.mt that the average waiting time was about four hours, while in a long queue and with no protection from the harsh Maltese sun.

Meanwhile, while answering questions by Newsbook.com.mt, the Police explained that “the length of waiting time may have increased”.

A spokesperson for the Police explained that the Conduct Office, located at the Police Headquarters in Floriana, operates from Monday to Friday between 7.30am and 12pm and 12.15pm and 2.15pm. Meanwhile, on Saturday it operates between 8.15am and 12pm. She explained that usually there is an officer or two serving people.

She went on to say that lately, the number of people applying for conduct has increased and as a result, the wait in front of the office “may be” increasing.

Sources from Newsbook.com.mt explained that they spent long hours waiting in line that circled the entire headquarters, at a time when the sun is the most unbearable.

COVID-19 measures when collecting your conduct

The sources described that temperature is taken by a police officer upon arrival, and if it falls within the appropriate range, then s/he is given a card showing that s/he was approved to wait in the queue. They explained that when queuing, due to the large number of people waiting there, the social distance of two metres is impossible to maintain and no one was properly enforcing it.

Newsbook.com.mt asked the Police Force about this, particularly about what measures are being taken to ensure the health of the people waiting there. The spokesperson explained that stickers were affixed to the floor on the inside and paint to the floor on the outside (where possible). These were made with the intention of enforcing the distance to be maintained between one person and another. Meanwhile, each person must be wearing a mask or visor. Inside the Office, hand sanitizers were made available in the corridor.

She claimed that the Police are constantly reminding people to keep their distance. “It is in the interest of the same individual to see that he is keeping the distance recommended by the Health Authorities,” insisted the Police.

Instead of waiting long hours in the sun, the Police Force offers a service that allows one to order one’s conduct online. But if you intend to do so, you must think ahead.

According to the Police, the mail is usually taking an average of seven days to arrive. However, on the website, it specifically says that the conduct will be delivered to the user within four days of being ordered.

A future full of uncertainty

Can Malta avoid a coronavirus tsunami?