The Government announced that 38 people were fined €100 each during the continuous patrols that the Police are doing to ensure that there are no groups of more than 3 individuals gathered in public places.

In its daily briefing about the coronavirus situation, the Government said that no one was found breaking the obligatory quarantine during the 517 inspections carried out in the last 24 hours.

“While tomorrow is a public holiday, the appeal remains that everyone should remain responsible and cooperate with the directives being issued by the authorities,” the Government said.

A snack bar at San Pawl il-Baħar was found open serving clients and was fined €3,000 for breaking the regulations ordaining its closure in order to reduce the spread of COVID-19. In all, 1,950 inspections were carried out in the Maltese islands. One may report abuses on 21692447.

The Government reiterated that visits to patients at Mater Dei have been suspended. This measure had already been introduced at St Vincent de Paul and at state homes for the elderly.

“Even the Gozo General Hospital will, as from tomorrow, suspend visits to patients as a precautionary and control measure because of COVID-19. From Monday 13 April, outpatient and clinic services will be transferred to the Barts Medical School,” the Government said.

The Government also said that the Valyou supermarket and part of the Playmobil factory were also disinfected after cases of COVID-19 were found among the workers. 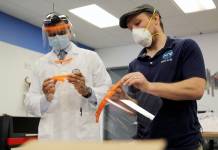