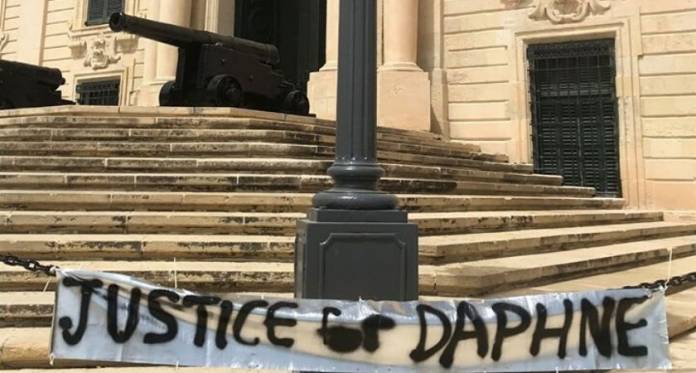 Due to the ongoing pandemic, the monthly vigil will not take place in Valletta on Saturday. Instead, the public and activists have found a way how to commemorate the memory of the journalist and at the same time continue demanding justice. The initiatives include another video which will be premiered on Occupy Justice’s Facebook page and a special programme organised by Repubblika.

The video which was published on the group’s page illustrates in brief how the Great Siege monument has become a permanent makeshift protest symbol demanding justice for Caruana Galizia and her stories.

Another video was premiered at 7pm by Occupy Justice featuring activist Pia Zammit who highlighted that the pandemic did not change their demands. She noted that little has changed, adding that the setting up of an inquiry and some resignations were not enough. The activist said that it was not acceptable for disgraced former Prime Minister Joseph Muscat who was forced to step down, to be appointed as an advisor to the government.

The group warned that they will not allow the government to use the ongoing coronavirus pandemic as a smokescreen or as an excuse to avoid responsibility.

Zammit stressed on the importance of supporting independent journalism during her video message.

The pressure group thanked the frontliners during the coronavirus pandemic.

One of the initiatives which has been undertaken by the public, includes the lighting of a candle in memory of Caruana Galizia at 7.30pm on Saturday. “We demand justice and an end to impunity,” a person wrote on Facebook.

A banner was hung by unknown activists outside the Office of the Prime Minister on Saturday afternoon.

Cartoonist Seb Tanti Burlò announced that 60% of sales from all prints of the series Fjuri ta’ Malta will be donated to The Daphne Caruana Galizia Foundation.

“Let not these flowers be a commemoration of Daphne’s death, but rather a celebration of her life. Let them be a reminder of nature’s beauty and resilience against those who seek to corrupt,” Tanti Burlò wrote on Facebook.

Meanwhile, rule of law NGO Repubblika will be streaming a special live programme on its Facebook page at 7.30pm. The programme will be hosted by former TV and radio presenter Norman Vella and will see the participation of MaltaToday journalist Matthew Agius, Louiselle Vassallo, Manuel Delia and Reporters Without Borders UK Bureau Director Rebecca Vincent.

Children spending more time with abusers due to pandemic – MMF