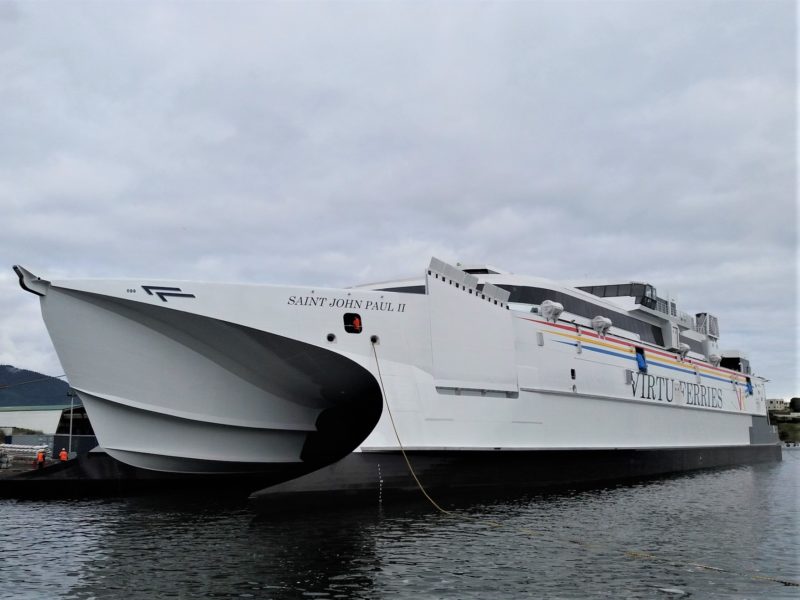 M/V Saint John Paul II, (Hull 089) afloat at the Incat shipyard in Hobart, Tasmania, is due to be delivered to Virtu Ferries at the end of January.The vessel will be deployed on the Malta/Sicily route in March 2019.

Upon delivery to Virtu Ferries, the vessel will commence a 9,600 nautical miles (17,780 kilometres), 20 day journey to Malta. The vessel’s maiden voyage will see her crossing the Indian Ocean, calling at the ports of Fremantle in Western Australia and  Colombo in Sri Lanka for refuelling, before passing Somalia, at the Eastern tip of Africa, to transit the length of the Red Sea where she will call at the last refuelling port of Jeddah before entering the Mediterranean via the Suez Canal. The last leg of the journey, Port Said to Valletta, should be covered in 30 hours.

Saint John Paul II is being built to conform not only to the obligatory International Maritime Organisation High-Speed Craft Code 2000 but also to The EU Directive 1999/35/EC of the European Maritime Safety Agency of the European Commission. The new build also conforms with the EU Maritime Green Policy, the European response to the new generation of ocean strategies based on science, technology and innovation. The shipbuilders (Incat), are acknowledged as world leaders in design and construction of high speed vessels, and pride themselves in building the fastest, efficient, environmentally clean, high speed vessels in the world.

Saint John Paul II is powered by four MTU engines generating a total of 36.4 Mega Watts.  These state of the art engines meet IMO Marpol Annex VI Tier II standards which regulate exhaust gas emissions, with the aim of reducing local and global air pollution. Four Wärtsilä water jets give the vessel a cruising speed in excess of 38 knots (over 70.4 km/hour). With a deadweight of 1000 tons, capacity for 900 passengers in 5 lounges, and a garage that takes 167 cars or 23 trailers, Saint John Paul II will be the largest High Speed RoPax Catamaran operating in the Mediterranean and the second largest in the world.

Saint John Paul II, is the fifth newbuild, and 11th high speed vessel, delivered to Virtu Ferries since the commencement of the high speed ferry service between Malta and Sicily in 1988. The company has invested in excess of Euro 175 million in high speed vessels that have, at some time, been operated on the Malta/Sicily route, effectively revolutionising the carriage of passengers and cargo between the neighbouring islands. Virtu currently also operate high speed vessels on international routes between Venice and Adriatic Ports in Slovenia and Croatia as well as Tarifa, Spain to Tangier in Morocco.

Virtu Ferries are acknowledged internationally as pioneering operators of high speed passengers and cargo ferries. In times of humanitarian crisis, Virtu have operated their vessels on time-charter to the Governments of Australia, the USA, Italy, and Malta and international corporations and institutions such as the International Red Cross and Medicins Sans Frontier.

The vessel is named after Saint John Paul II. Virtu Ferries had the honour of welcoming HH Pope John Paul II on board ACC San Frangisk, on that momentous return voyage between Grand Harbour, Valletta, St Paul’s Islands and Gozo on 27th May 1990.

Like all other Virtu high speed vessels, the Saint John Paul II will fly the Malta Flag and is certified for international voyages by the International Classification Society, DNV GL.

Largest catamaran in Mediterranean to be delivered to Malta