22 individuals were each fined €100 after they were caught in public in groups of over than four individuals who were not from the same household.

Public gatherings over four are not allowed due to the ongoing coronavirus pandemic. Police officers accompanied by Environmental Health Officers continued doing daily inspections ensuring that those placed under mandatory quarantine were at home and to ensure that no public gatherings which contravene the relevant legal notice took place.

Out of 315 inspections, no one was found breaching mandatory quarantine regulations, the government announced. in the daily coronavirus bulletin.

On Sunday, six new coronavirus cases were detected during the swab tests carried out in the last 24 hours. Six individuals were also declared to have recovered fully from the virus. The total number of active cases remained the same. Two healthcare workers and a patient in the same ward where they were assigned, were among the six who tested positive.

The health authorities urged the public to remain home and avoid going out unnecessarily. 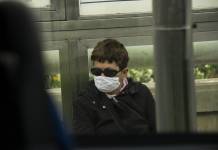