Mathematician Prof Josef Lauri, in comments to Newsbook.com.mt, was cautiously optimistic. “The epicurve finally shows signs of a downward trend of numbers. As one can see from this graphic, we are basically where we were twenty days ago, but then the numbers were increasing and today they are decreasing. Judging by previous patterns, either we will be soon reaching a trough followed by another (hopefully much lower) peak, or else this could be a run towards really small daily new numbers. Various time series models give forecasts ranging between 25 and 34 for tomorrow, but these are influenced by the recent fluctuations and high numbers we have had. However, if what was causing these recent numbers is now under control then we can really hope for a figure tomorrow more comparable to today’s”, said Prof Lauri. 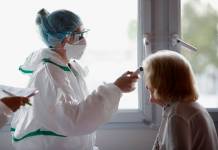 The pandemic has claimed 31 lives.