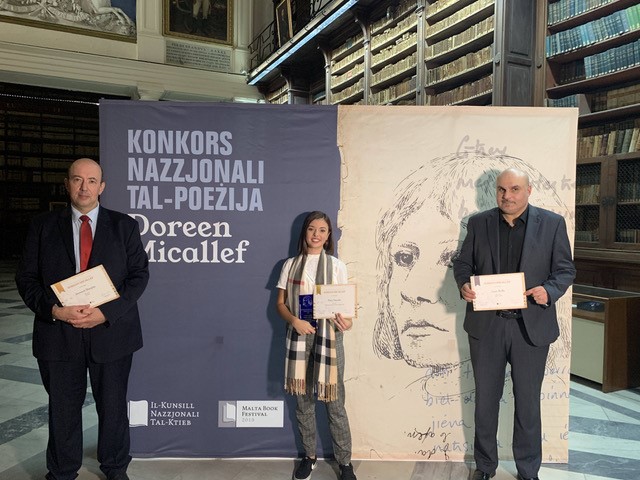 The winners of the 2020 Doreen Micallef National Poetry Contest were announced and read on the evening of Friday 13th November in a ceremony presented by actress Coryse Borg which streamed during the Malta Book Festival.

Out of the 47 submissions entered for this year’s contest, Klara Vassallo’s poem ‘Dokumentazzjoni tal-Minuti Mnikkra Fik’ has been chosen as the winner of the Contest, winning her €1,000. The jury for this second edition were the three poets Dr Immanuel Mifsud, Nadia Mifsud and John Aquilina.

Klara Vassallo is the second and the youngest person to win the Doreen Micallef National Poetry Contest since it started. The contest bears the name of the author of a confessional collection of poems of spiritual and romantic yearning, active since the times of the Movement Qawmien Letterarju. In Vassallo’s poem, Nadia Mifsud praised “a form that’s beyond expectations, modern writing, very good rhythm, an effective blend of longer and shorter verses… and interesting imagery”, which made it the best submission.

The second prize was awarded to Louis Briffa with the poem ‘Tgħix Irridek’. The third prize went to Jesmond Sharples for his poem ‘F’Posti’.

The National Book Council Executive Chairman Mark Camilleri congratulated the winners and encouraged aspiring writers to keep writing, while commending all applicants for the courage in bringing their work forward. He added that the Contest, named after a pioneer of Maltese feminist writing who failed to receive due appreciation in her lifetime, keeps aspiring for high literary standards such that it is able to accentuate Maltese poetic writing in all its forms.

The Doreen Micallef National Poetry Contest is an annual contest, open to poets of all ages which awards a single original and unpublished poem in the Maltese language of no longer than 36 lines, in an anonymised judging process. The call for submissions opened in June 2020.

The National Book Council thanks those who submitted poems for the Contest and the members of the jury for their work. The next edition of the Doreen Micallef National Poetry Contest opens in June 2021.

The full results can be accessed here.