The 10-day programme brought together over 130 creatives from 11 countries, including Malta.

The repertoire consisted of 21 projects with five commissions and collaborations with six of Malta’s leading Public Cultural Organisations (PCOs). Altogether, this led up to a grand total of 112 performances, seven screenings, and 19 workshops spread over 12 different venues, with nine creative forms offering patrons a wonderfully-diverse range of performances to choose from.

Read more:
Ninth edition of ŻiguŻajg has kicked off 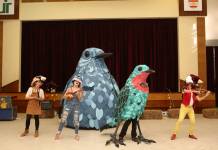 Of the 21,000 people that attended the Festival, 8,500 were students from 45 schools across the Maltese islands.

Furthermore, ŻiguŻajg 2019 presented two delegate programmes and hosted 30 visiting international delegates, while strengthening its association with established networks such as ASSITEJ, the International Association of Theatre for Children and Young People; IETM an international network for contemporary performing arts; and EFFE, the European Festivals Association.

Expressing complete satisfaction at the outcome, outgoing ŻiguŻajg Festival Director Daniel Azzopardi said: “This edition of ŻiguŻajg has yet again exceeded expectations with respect to the quality and diversity of the programme, outreach and community engagement initiatives, the numerous creatives involved, the hard-working technical and logistic crews, administrative staff and numerous venue assistants; and of course high participation by schools and the general public. I now hand the ŻiguŻajg Festival baton over to my successor, as preparations for next year’s edition get under way.”

ŻiguŻajg is produced by Fondazzjoni Kreattività. For more information about the festival and the ongoing ŻiguŻajg season events you may visit the website.

Ninth edition of ŻiguŻajg has kicked off

An alternative opportunity through vocational subjects

Coryse Borg   February 17, 2020
Minister for Education Owen Bonnici recently visited the Alternative Learning Programme (ALP) School, which forms part of the St Thomas More College as part of a series of visits in Malta's schools and educational institutions. This programme is only offered at this school.

Amy Borg   February 15, 2020
The Ministry for Finance and Financial Services welcomes the 2020 Winter Economic Forecast published on Thursday by the European Commission. The Ministry for Finance said in a press statement that this report follows the 2019 Autumn Forecast, in that it expects the Maltese economy to record the highest GDP growth rates in the EU for years 2020 and 2021.