Ten employees at the Gozo General Hospital have been quarantined after being exposed to coronavirus.

Steward Health Care spokesperson said that 29 employees were quarantined since they would qualify as vulnerable or live with someone who is considered to be vulnerable, in his comments to Newsbook.com.mt.

The American giant which manages the Gozo General Hospital is not carrying out swab tests for coronavirus which are being done in the community and at the Gozo hub.

Until Thursday out of 402 cases, 20 were recorded in Gozo. The first coronavirus related fatality was an elderly woman from Gozo.

Out of the 20 cases registered on Gozo, four are healthcare workers at the Gozo General Hospital. The spokesperson said that these were two carers and two nurses who had contracted the virus.

A total of 392 swab tests were conducted on patients including those admitted to the Emergency room and those who were admitted due to unrelated health issues.

Five patients have been admitted to the Gozo General Hospital to be treated for coronavirus, including the elderly woman who earlier on died after contracting it. At present there are a total of three patients who are in a good health condition.

The other patient who had mild symptoms was discharged and is recovering at home, the spokesperson explained.

Steward Health Care said that the information was valid until 14 April.

The Day Care Unit has been transformed into an Infectious Disease Unit. The spokesperson said that the necessary structural changes were also carried out.

Doctors and specialists working at the IDU at the Gozo General Hospital are in close contact with the IDU at Mater Dei Hospital and the Infectious Control Team to ensure that the same protocols were being followed.

Barts Medical School to be used as a hospital – Steward

Barts Medical School will be used as a hospital, Steward Health Care announced in a statement on Wednesday. The campus was integrated with the hospital as part of the measures being taken in relation to the outbreak of coronavirus. 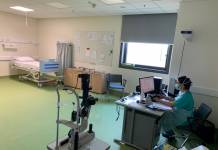 72 elderly individuals who reside at Dar Sant’Anna at the Gozo General Hospital have been transferred to Downtown Hotel along with staff members. Earlier an employee of the same hotel had tested positive for coronavirus.