Yesterday, following hours of observation, 1.7 tonnes of shisha tobacco, with no excise paid on it, was seized by Customs Officials from a barber shop in San Gwann.

Several people were called for interrogation and it is believed that some of the suspects will be arraigned in court in the coming days. 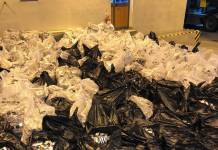