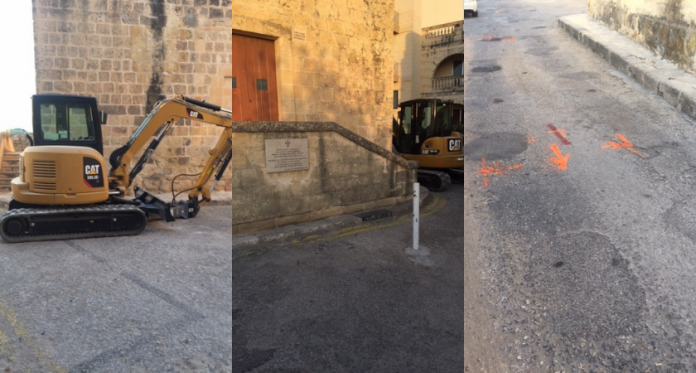 Damage has been caused to seventeenth century chapel found in the limits of Mosta known as Tal-Qares by ongoing works. St Andrew’s Chapel is facing several threats including being dwarfed by a development on a site which is some 4m distance away.

Mosta archpriest Sebastjan Caruana has written to AX Construction and invited them to see for themselves the cracks which appeared in the chapel’s walls. Fr Caruana explained that until the excavation works in Triq id-Difiża Ċivili started, the chapel was in a ‘very good state’. The chapel was restored back in 2002.

Inviting the developers to see for themselves, the archpriest urged them to see what can be done to fix the damage that has been done to chapel, prior to the commencement of more works in the proximity of the chapel.

Speaking to Newsbook.com.mt, Curia’s administrative secretary Michael Pace Ross remarked that excessive development is not only leaving a negative impact on people’s health and the natural environment, but is also proving to be detrimental to the country’s heritage, which includes this chapel.

In a condition report prepared by Perit Vince Buhagiar he had warned that the proposed excavation works will invariably cause vibrations to the rock terrain which could be both major and minor. He warned that even if the latest cutting technology is used utilising perimeter trenching prior to pneumatic hammer equipment, there is great concern that structural movement will “inevitably occur”. Perit Buhagiar had warned that, “that the potential damage that may be caused to the chapel could be now irreversible”.

In March local pressure group, Temple Rescue Malta expressed their concern about the development approved on the site. The archaeological site of Tal-Qares temples in Mosta, is understood to be dated to the Bronze Age, with a collection of pottery, a network of vine trenches, ancient quarries, water cisterns and water management systems and a large wall. The Planning Authority however had told TVM, that Tal-Qares is of low historic value after a study was carried out on the site.

In August 2017, the Planning Authority approved a four-storey block by AX Holdings, consisting of a showroom, maisonettes, apartments, penthouses and basement garages.

The area had been added to development boundaries in the 2006 rationalisation.