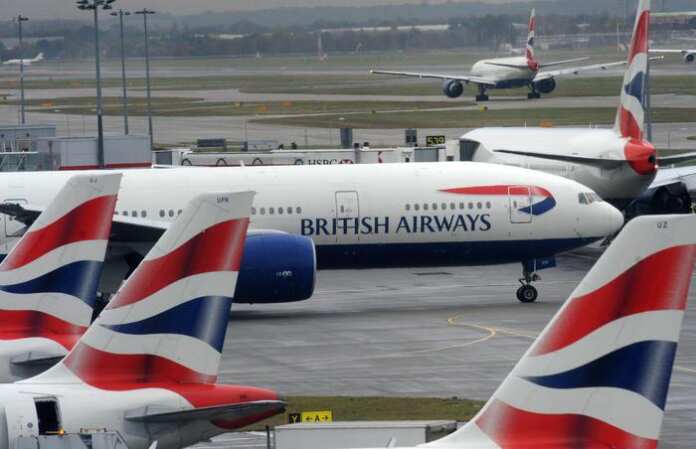 Holidaymakers flying with British Airways are facing delays and cancellations to their flights from London Heathrow, Gatwick and City Airports today following a computer glitch.

While the company tried to reassure passengers that the glitch was not impacting BA flights elsewhere, the failure is expected to cause major disruption for airports in the rest of the UK and Europe.

The incident was first reported between 9.30AM and midday (10.30AM – 1.30PM local time) when around 50% of BA flights from Heathrow Terminal 5 had to be cancelled or delayed.

On Twitter, the airline said that they were, ‘working as quickly as possible to resolve a systems issue which has resulted in some short-haul cancellations and delays from London airports,’ and that, ‘A number of flights continue to operate but we are advising customers to check ba.com for the latest flight information before coming to the airport.’

⁦@British_Airways⁩ ⁦@BBCNews⁩ – here we go again! Chaos! This is only half of one queue! My flight cancelled as are 100’s of others. I had checked-in so need my bag back – others told as checked-in can’t leave T5 without checking out! Happy 100th anniversary #BA pic.twitter.com/xr0DRUieQh

It is understood that the disruption has resulted in the cancellation or delay of flights from the Scottish and Northern Irish airports in Edinburgh, Glasgow and Belfast.

The glitch has resulted in customers being unable to carry out their online check-in, or for flights to actually depart. BA has said that it reverted to a back-up system in order to allow some affected flights to leave.

Major computer failure with British Airways at Gatwick this morning. This is the queue for the queue at check in. Currently stuck on ground cos pilot can’t get data. Set off early if you have a flight pic.twitter.com/hL37TGRJ70

According to travel experts speaking to the Guardian, passengers which are delayed for more than two hours from catching flight, can obtain a compensation as is stated in EU law. This could include compensation plus the cost of the ticket.

BA is understood to be offering affected customers the opportunity to fly with the window of August 8 – 13th instead.

A similar situation plagued the airline in 2017 when 75,000 passengers were unable to fly from Heathrow or Gatwick airports during the May bank holiday.

The incident comes only a day after the airline returned to full flow following the need to recommence a number of flights affected by threatened industrial action by Heathrow airport staff.

BA’s flights were just some of the 177 flights that were impacted by threatened strikes over low wages.

The airline itself is also facing its own strike action by its pilots. According to a ballot carried out by Balpa, 93% of the airline’s 4,000 pilots have decided to pursue industrial action. Their grounds are a rejection of a three year pay deal offered by the company.

The glitch also follows the lucky escape of around 200 passengers from a BA flight from London Heathrow to Valencia Spain yesterday.

Ten minutes before landing, smoke started to billow through the cabin. Passengers capturing the situation described how the plane descended suddenly before making an emergency landing.