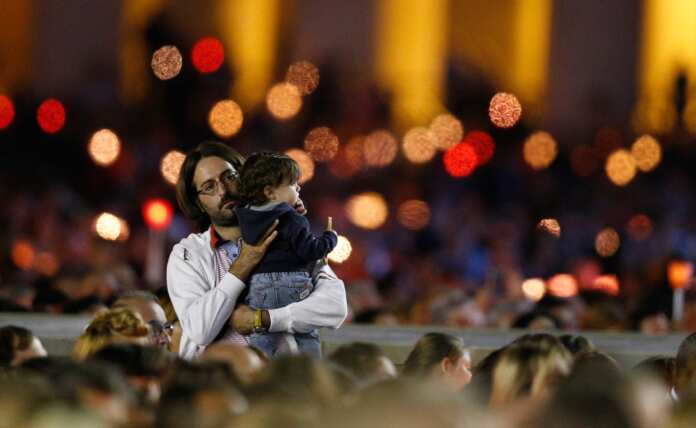 Durng this first week of the Synod we tried to look in the light of faith at how millions of families truly try day by day to realize what Pope Francis called “God’s dream for his beloved creation.”
We witness every day families who try to make God’s dream their dream; to find happiness sharing their loving journey and seeing their love realized in the children they bear and guiding their children, especially their adolescent children into the mystery of marital love.
The group stressed that the extended family is so often the ordinary means by which men and women are accompanied through every stage of life. The love and support given by and received in so many families on the pilgrimage of life is an expression of the love that God has for his pilgrim people.
Despite the challenges that the family face in every culture, families with the assistance of divine grace do find within them the strength to carry out their vocation to love, to strengthen social bonds, and to care for wider society, especially for the most vulnerable. The group feels that the Synod should express strong appreciation to such families.
It was noted that alongside the socio-cultural challenges that families face, we should also openly recognize the inadequacy of the pastoral support that families receive from the Church on their itinerary of faith (..)
An analysis based on the light of faith is far from an analysis which avoids facing reality. If anything, such an analysis can focus on questions of marginalization, which easily escape from the mindset of the dominant culture in many of our societies. An analysis based on the light of faith can lead to a deeper discernment of how families suffer marginalization and forms of poverty, which go beyond economic poverty to include the social, cultural, and spiritual.NSuch discernment should help us to identify groups in our world of those who find themselves in a situation similar to that of Jesus and his parents, for whom there was “no place at the inn.” ….
Social policy should have a priority concern for its effects on families. Good social policy should begin with an indication of where the social peripheries of each community lie, rather than from a simple economic analysis. Such discernment of the reality of marginalization should also be a dominant characteristic of the pastoral care of the Church for families. Social problems like inadequate housing, unemployment, migration, drug abuse, the cost of rearing children all have the family as primary victim.
Young people live in an oversexualized culture. They need to be educated to a culture of self-giving, which is the basis of the self-donation of conjugal love. Young people need to develop the ability to live in harmony with emotions and feelings, and to seek mature affective, mature relations with others. This can be an antidote to selfishness and isolation, which often lead young people to a lack of meaning in their lives and even to despair, self-harm, and suicide.
Generosity and hope are at the root of a culture of life. Life in the womb is threatened by the widespread practice of abortion and infanticide. The culture of life should also embrace the elderly and those with special needs, where very often support only comes from the extended family. Many families testify to the fresh vision of life that comes when one of its members has such special needs.
The experience in our group was that of pastors who share a firm conviction that the future of Church and society passes through the family. It was stressed that politics and policies may attempt to change structures, but politics alone do not change hearts.
The humanization of society and our future will depend on how was as a community realize God’s dream for his beloved creation. We can only give thanks to God for our Christian families who through their love and self-giving, however imperfect, open their hearts to the healing love of the God revealed in Jesus Christ.
We need to speak of marriage and the family in new ways. Part of the newness needs to be a less negative reading of history, culture and the situation of the family at this time. True, there are negative forces at work at this time in history and in the various cultures of the world; but that is far from the full story. If it were the full story, all the Church could do would be to condemn. There are also forces which are positive, even luminous, and these need to be identified, since there may well be the signs of God in history. It is also true that marriage and the family are under new kinds of pressure, but this again is far from the full story. Many young people still want to marry, and there are still remarkable families, many of them Christian, heroically so at times. To see and speak positively of things is not to indulge in a kind of denial. It is rather to see with the eye of God, the God who still looks on all that he has created and still finds it good.
We owe a great debt to these families who in immense ways support and challenge our ministry as pastors.