Birkirkara continues to record the highest number of road traffic accidents between the period of April and June 2019.

This figure rose from 298 to 312 RTAs from the same period in 2018. This locality in the NH region, accounted for 8.2% of all accidents across Malta and Gozo.

Second on the list is another locality within the North Harbour region, Hal Qormi. This locality recorded 215 accidents in the region, 5.6% of all accidents in Malta.

This placed the locality first on the list of the top ten localities to register accidents in the period. 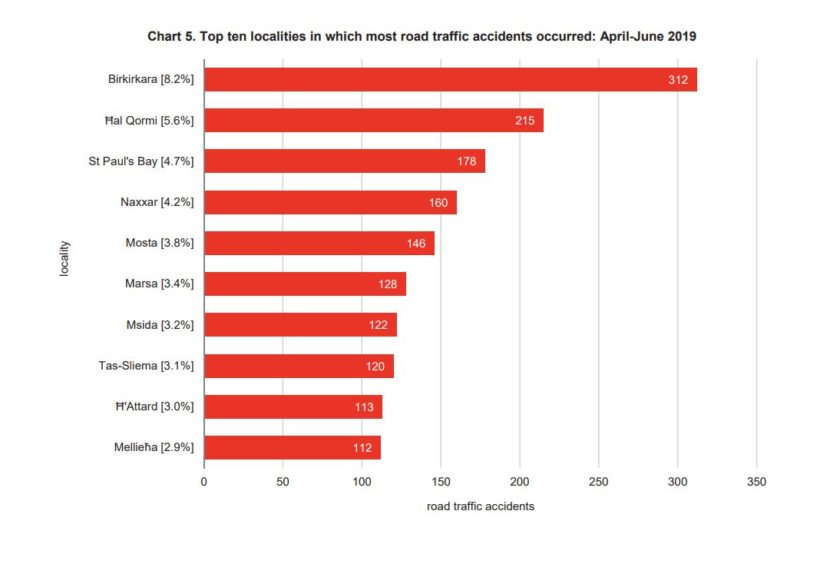 Wider still, the Northern Harbour region continues to record the highest number of road traffic accidents and casualties off all districts in Malta and Gozo.

According to the latest figures from the National Statistics Office, in the year to year analysis of the January to June period, there had been 153 more road traffic accidents between 2018 and 2019, (2,627 – 2,780).

The SH recorded a smaller increase in the six month period between 2018 to 2019, 193 to 144. However, compared to the number of accidents recorded, there were far fewer casualties associated with these accidents, in the second quarter. The data shows that there had been a 24.2% decrease, from 95 to 72.

Similar decreases with other regions during the second quarter. The Northern Region recorded a drop from 91 to 68, 25.3%.  The biggest drop was recorded in the Western region at 39.7%, 58 to 35.

Most traffic accidents and casualties in 2nd quarter of 2019, on a Thursday

The National Statistics Office’s report also finds that during the second quarter of 2019, Thursday recorded the highest number of accidents.

The data shows that 606 accidents happened on a Thursday, more than other days during the week. Most of these accidents were recorded between Midday and 6PM. 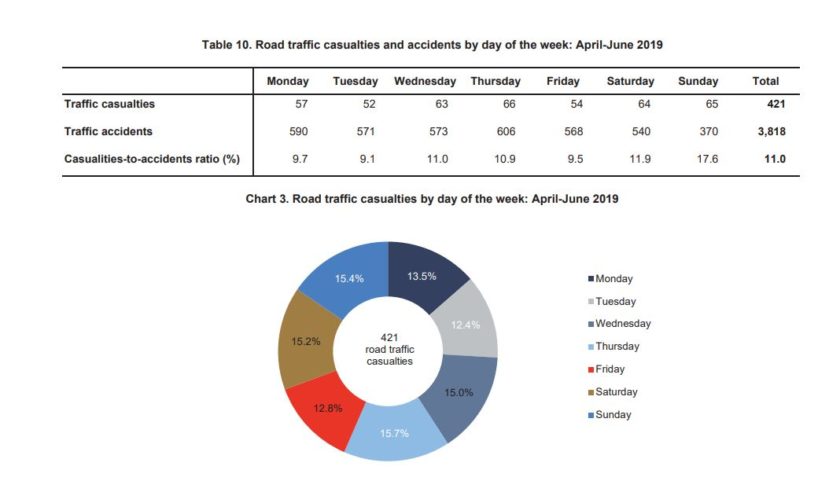 Second to Thursday was Monday which recorded 590 accidents. Surprisingly, this was higher than those recorded on Friday (568), Saturday (540) and Sunday (370).

Likewise with casualties, Thursday also recorded the largest number per day of the week. This figure sits at 66. This was closely followed by Sunday (65), Saturday (64) and Wednesday (63).

15 ta' Lulju 2020
We use cookies to ensure that we give you the best experience on our website. If you continue to use this site we will assume that you are happy with it.OkCookies Policy