A group of 37 asylum seekers were rescued off a dinghy, by an Armed Forces of Malta patrol boat on Sunday morning, and were later disembarked at Haywharf.

The group were brought in on board P52. The Armed Forces of Malta later sent a two-line statement which can be seen below at 2.23pm on Sunday with the disembarkation having taken place an hour earlier. 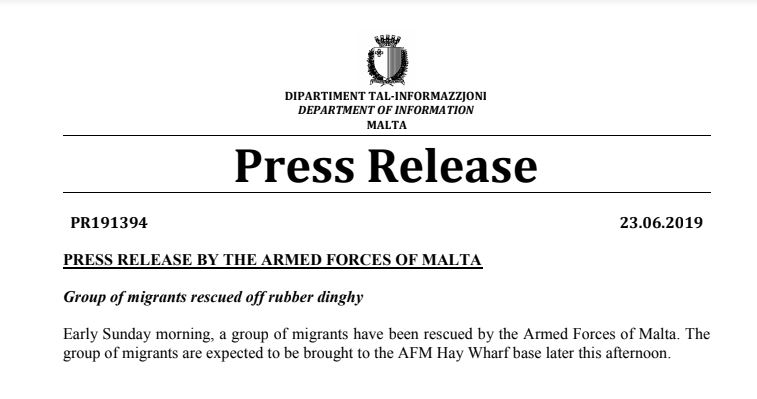 Alarm Phone, a hotline for people in distress, announced on that Malta’s Maritime Coordination Centre has confirmed with them that an asset was sent to rescue the people in distress. Alarm Phone stressed that the boat is still moving, however the people on board are tired and exhausted, as they repeatedly asked for help.

The rescuees will be brought over to Malta on Sunday afternoon.

Meanwhile a group of 43 asylum seekers enters its 11th day on board Sea Watch 3. The non-governmental organisation vessel had rescued originally a group of 52 asylum seekers from a dinghy in distress some 47 nautical miles off Zawiya, Libya. Since the rescue, 11 medical evacuations have taken place leaving 43 rescued migrants on board, among them 3 unaccompanied minors. Both Italy and Malta have refused to give a safe port of disembarkation.

Where is the rescue? Boat still at sea & people in panic. They say some are "near death" – they need immediate medical care! The situation is urgent but #Malta is not informing us about #SAR procedures. They were informed of this distress in Maltese SAR zone over 6h ago!